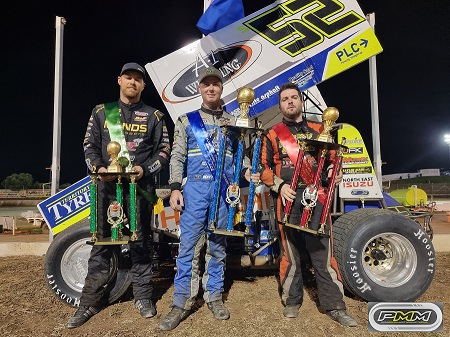 A new Australian 360ci Sprintcar Champion was crowned last night as Matt Egel led from start to finish in the 40-lap decider at the Murray Machining and Sheds Murray Bridge Speedway. After starting from the pole, he dominated the feature event to become an Australian Sprintcar Champion and in the process putting the disappointment of losing the 2014 Championship behind him.

“It was a nerve wracking 40 laps. The lapped traffic was making nervous, and I saw Ryan show his nose twice there during the race, but we got the job done and I am absolutely stocked” commented the new Australian Champion following the race.

“This result really makes up for the race I lost with Tony (Bartlett) about eight years ago, but it would be great to have two, it almost haunted me, we were so close, and we dominated that week but now we have got one under our belt. We are in the history book now. It just a great thing for your career to be pencilled in as an Australian Sprintcar Champion. We will be on the T-Shirt, it’s awesome. I can’t thank the Brown Family and my guys enough. This has been the best year of my career” he added.

For second placed and four-time Champion Ryan Jones, it was the first time he had been on the podium for the Australian 360ci Title without winning the Championship.

“We were second last night, second again tonight and as the racetrack played out, we had to be the top at both ends and we only had to move around in traffic. The stoppages just came at the wrong time as Matt was a bit of a sitting duck being the first through traffic and I was able to get a run at him while the traffic was around, but the cautions helped him out. Then that final red really came at the right time for him and cleared the way” commented Ryan.

“But credit to those guys, we had a second placed race car both nights, and it showed”.

Just as he had the previous night Albury’s Grant Anderson followed Egel and Jones across the line to record his first ever podium result in the Australian 360ci Championship.

“Overall, the weekend was very successful for us and this team. I just would have loved to have stayed in the traffic a little longer in that 40 lap A-Main. Obviously, the clean air was important. Egel and Jones are really good around here, we were keeping pace with them, but it was difficult to make any slider attempts of passing moves in the clean air but when we got to traffic it became very interesting.

But running third we shouldn’t be disappointed, it’s a great result for this team. We haven’t been together too long, we don’t race 360’s very often, we don’t come here very often so we should be very proud of third in an Aussie Title” commented Grant as we caught up post-race.

Van Ginneken took the position as the 20th stater after local favourite Daniel Pestka failed to fire after a fuel leak was discovered just prior to pushing off.

Former Champion Chad Ely and Paul Soloman were only other classified finishers.

The final was littered with hard luck stories including South Australian Champion Hayden Pitt, who was running fourth early the race, only to have the driveline fail while Victorian Champion Brenten Farrer crashed out in turn four while running fifth with nine laps to go.

Following a massive open lap pile up that took out six cars in turn two Todd Hobson transferred to the A-Main with Campbell, Ely and Charge while Van Ginneken and Jamie Hendry were the two reserves.

The opening heat of the night was marred by an accident involving Simpson racer Phil Lock and Mark Caruso with the race being declared early. Brenten Farrer would was given the win. After a delay in the program, the final heats were conducted with youngsters Ben Morris, Todd Moule and Todd Hobson each taking a win.