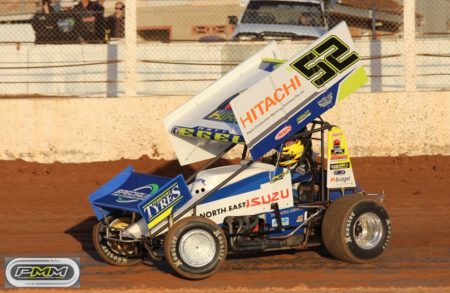 Last Saturday night Matt Egel rose to the occasion at the Whyalla Speedway as he parked the Brown Family owned / Whyalla Earthworks Racing #52 in Victory Lane on home turf after running down Ryan Jones to secure the Steel City Sprintcar Cup. It was the second time in succession that the locally based team had won in Whyalla following Lachlan McHugh’s victory in the South Australian Title back in March.

After starting on the front row alongside Jones Egel trailed the #63 Rivercity Sheds Triple X for the opening 21 laps before he found the top of the racetrack to his liking sweeping past into the lead before going on to win by over 5 seconds.

Jones held onto second by less than half a second over a fast finishing Marcus Dumesny therefore the podium comprised of the same three drivers from the season opening Sprintcar show at Murray Bridge.

“I probably driving for the best Sprintcar team in South Australia at the moment. I can’t believe the opportunity that I have been given by the Brown Family. They have put a great team together and we have a great car. All day everyone had been telling me about how good Lachy (McHugh) was last time in this car so the pressure was on so it good to get an early season win for the team” added Egel following his win.

Fourth across the line was Lisa Walker, who recorded a career best 410ci Sprintcar result, with Jessie Attard rounding out the top five in his Whyalla Speedway debut. The top five were the only drivers to finish on the lead lap of the 30-lap journey that went flag to flag.

Joel Heinrich was another with a career best run in sixth while Adrian Cottrell and rookie Max Vidau completed the finishers.

Earlier Ryan Jones set the pace in qualifying just edging out Egel and Walker. With front row starts both Jones and Egel won their opening round of heats convincingly while the second round of heats produced two major surprises.

Heat 3 saw Scott Enderl, who was racing his 360ci, held out Marcus Dumesny, Daniel Pestka and Egel to win while the final heat was taken by second meeting rookie Max Vidau. After a successful junior career in Dirt Karts the 19-year-old has returned to racing on dirt after competing in Formula Ford and Porsche Cup cars for the past few years.

Due to the cancellation of the back end the 2019/20 season the rescheduled South Australian 360ci Sprintcar Sprintcar Title was also on the program but unfortunately the event only attracted 4 entries. Despite the small field you can take nothing away from feature winner Jarman Dalitz who set the quickest lap in time trials, won the opening heat and then led all 15 laps to defeat Scott Enderl and Mike Fox.

With Dalitz and Enderl sharing the front row the Championship was basically decided by a drag race to the opening turn. For Dalitz his 360ci State Title win goes with his South Australian Wingless Sprint Championship he secured in 2015.

The Sprintcars are scheduled to return to Whyalla on Boxing Day (December 26) with a $10,000 to win race. Further details will be released as they are confirmed.