Edoardo Mortara: ‘Like hurtling through an ultra-narrow, yellow-and-black labyrinth’

Edoardo Mortara: ‘Like hurtling through an ultra-narrow, yellow-and-black labyrinth’ 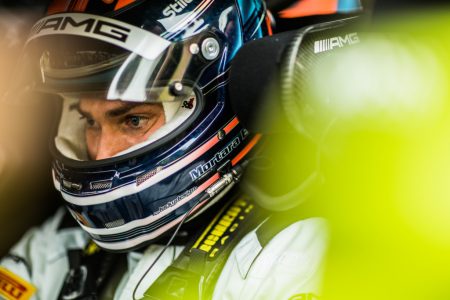 In ten days’ time, a high-calibre trio in three Mercedes-AMG GT3s will be seeking to defend the drivers’ and manufacturers’ titles in the FIA GT World Cup Macau. In addition to Maro Engel and Raffaele Marciello, the hopes of the brand rest on ‘Mr Macau’, last year’s winner Edoardo Mortara.

Brazil, here we come: The drivers’ world championship may have been wrapped up last time, but in Brazil, the battle for the constructors’ championship goes into the next round. In the past four seasons, the team has registered three wins at the José Carlos Pace Autódromo in São Paulo: two for Nico Rosberg (2014, 2015) and one for Lewis Hamilton (2016). Over the years, drivers of Mercedes-powered cars have made 21 podium appearances at Interlagos, eight of them for the race win. In each of the last four Brazilian Grands Prix, a Silver Arrow has led off from pole position: twice Nico (2014, 2015), once Lewis (2016) and once Valtteri (2017).

Mercedes-AMG celebrates title win in the China Endurance Championship: The Mercedes-AMG Customer Racing Team T.K.R. made sure of the title by winning the third and final race of the China Endurance Championship. In the grand finale to the season hosted by the Ningbo International Circuit, Zhang Dasheng, Ling Kang, Xu Wei and Han Songting (all CHN) in the number 777 Mercedes-AMG GT3 pulled out a two-lap lead to claim a comfortable victory. Meanwhile, at the Okayama International Circuit in Japan, the 2018 Super Taikyu series was also reaching its climax. Atsushi Sato, Ryosei Yamashita and Norio Kubo (all JPN) in the number 112 Mercedes-AMG GT3 entered by RN-sports finished eighth.

Edoardo, in your racing career, you’ve won the Macau Grand Prix six times, four of which were in the GT category. What is the secret behind your success?Edoardo Mortara: I just love the Macau GP, and I’m so happy every time I compete here. Because it is a street circuit that goes right through the heart of the city, it’s obviously very tight. There are hardly any opportunities for overtaking. That’s why it’s especially important to be in the lead group right from the start – ideally at the free practice and qualifying stage. I managed that brilliantly in 2017, and in the race, I was able to control the field from the front. Over the relatively short sprint distance, it’s important to quickly get into a good rhythm of attack and control and to be fully focused. You can’t afford to make a single mistake in Macau.

How do you rate your chances of defending your title?
Edoardo Mortara: It will certainly not be easy. One look at the line-up is enough to see that the standard of competition in GT racing is getting higher from year to year. But we are likewise in a strong position. Maro has also won here twice, and Raffaele had a really strong Macau debut in the Mercedes-AMG GT3 last year. Consequently, I’m feeling very confident. Together with the GruppeM Racing crew, we will definitely prepare our Mercedes-AMG GT3 optimally and then go on all-out attack.

Tell us what it’s like driving on the Macau circuit?
Edoardo Mortara: Macau cannot be compared to any other race track. The barriers and walls are extremely high at various places, and some of the corners are completely blind. Sometimes it feels like you’re hurtling through an ultra-narrow, yellow-and-black labyrinth. In addition, there are constant changes of elevation. It’s an indescribable feeling. I’m relieved that there will be slightly fewer GT3 cars on the grid this year – the track is already more than tight enough as it is.