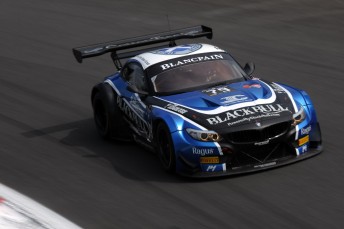 Legendary Scottish motor racing outfit Ecurie Ecosse kicked off their 2014 season with an impressive result in the Blancpain Endurance Series opener at Monza on Sunday (April 13) where Olly Bryant, Andrew Smith and Alasdair McCaig brought the squad’s Barwell Motorsport-run BMW Z4 GT3 home fourth in their 19-strong Pro-Am class and 12th overall in the field of 38.

After a series of trouble-free practice sessions, Bryant utilised new tyres to qualify ninth in class and 21st overall on Saturday afternoon with a best lap that was just 0.15sec behind the best placed Z4 of Nick Catsburg and TDS Racing.
Smith began Sunday’s race and, despite taking contact from the RJN Nissan of Alex Buncombe, safely navigated his way through the tight turn one chicane that was backed-up with cars fighting for position. A few laps later Richard Abra’s spinning MP Motorsport Aston Martin necessitated the Scot to take evasive action at Parabolica, allowing the #51 AF Corse Ferrari 458 to slip by. That was to hamper Smith’s pace over the remainder of his stint as lap after lap he took back the position through the higher speed corners only to be re-passed along the straights thanks to the Ferrari’s superior top-end speed.
After 35 laps of frustration Smith pitted and handed over to McCaig, who would end up seventh in class after the other Pro-Am entries had all stopped thanks to the lightning turnaround by Barwell’s crew. Lapping in clear air with fresh tyres, the Scot completed an impressive hour-long stint of his own before handing the car over to Bryant in ninth with one-third distance remaining.
The Henley-based BMW Ambassador wasted no time getting down to business and passed two cars for position on his out-lap, including Michael Caine’s Pro Cup-entered Oman Racing Team Aston Martin. And a string of further impressive overtaking manoeuvres, as well as lap times equalling those of the highest placed Pro Cup cars, quickly moved the Ecurie Ecosse BMW up the order. Such was his progress that with just eight minutes remaining Bryant passed the RJN Nissan Academy GT-R into the Parabolica to take fourth in class.
Olly Bryant: “I’m delighted with the result, especially after all the effort that has gone in behind the scenes from the whole team and huge support from our sponsors. It’s an excellent opening result for Ecurie Ecosse in what promises to be an exciting season both in Europe and the UK. It was my first time at Monza and I thoroughly enjoyed the challenge.”
Andrew Smith: “We went to Monza expecting to be on the back foot with the Z4 as this was never going to be our strongest circuit. However, this is endurance racing and the combination of the usual faultless support from Barwell and strong pace from all three drivers allowed us to achieve a very strong result and great points haul. I can’t wait for Silverstone, a circuit where we know the Z4 will be superb!”
Alasdair McCaig: “This is a great way to kick off our 2014 Blancpain Endurance Series campaign! Everything ran like clockwork thanks to the Barwell Motorsport team, and of course my co-drivers.  We had a fantastic set-up, a reliable car all weekend, and nailed every pit-stop throughout the race.”
Mark Lemmer, Barwell Motorsport Team Principal: “Monza is not a Z4 circuit so to get off to such an impressive start is very satisfying. We will be even stronger at Silverstone.”
Ecurie Ecosse’s next competitive outing sees the team head to Oulton Park this weekend (April 19-21) for round one of the British GT Championship with Marco Attard and BMW factory pilot Alexander Sims on driving duty. That’s followed a month later (May 23-25) by round two of the Blancpain Endurance Series at Silverstone.