Easter spoils for Britten and Eveleigh

Easter spoils for Britten and Eveleigh 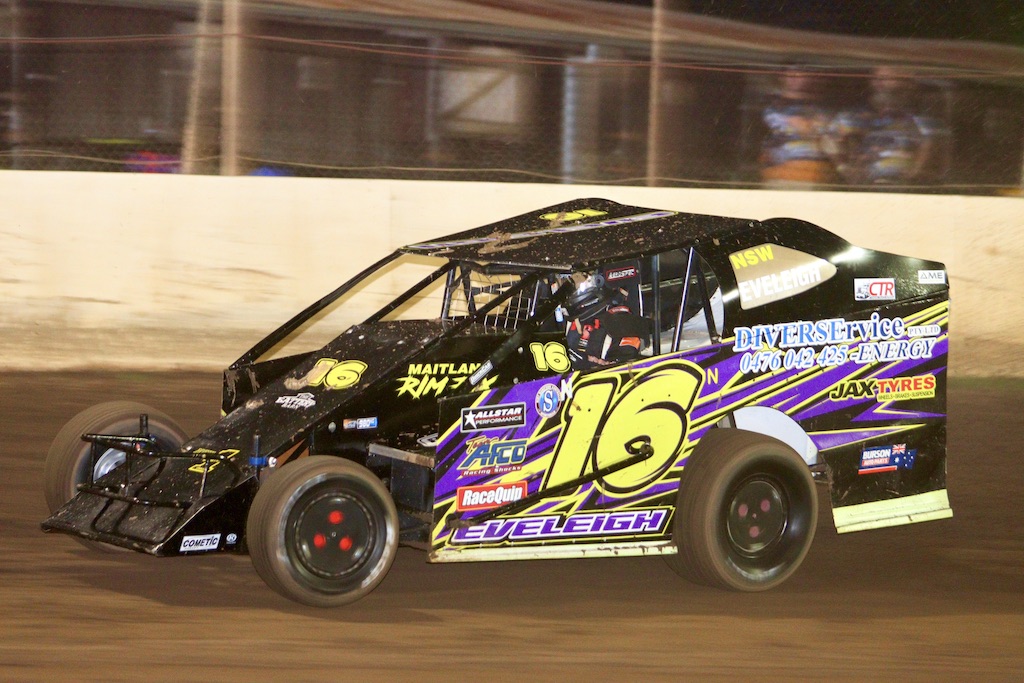 THREE consecutive nights of Easter Showdown action was held at Hessions Auto Parts Grafton Speedway over the Easter Long Weekend and the standout performers were Kevin Britten and Blake Eveleigh.

Both Britten and Eveleigh managed to score back-to-back NSW V8 Dirt Modified Title wins, with Britten snaring the NSW Title in the Open category and Eveleigh doing likewise in the Sportsman category.

The action commenced on the night of Good Friday, with Eveleigh showing his class in the NSW Title for the V8 Dirt Modifieds Sportsman category by dominating the feature race from beginning to end. At the completion of the 25-lap event, he defeated Mick Reid and Owen Scott in second and third place respectively. One of the form drivers heading into the NSW Title was Brock Gardiner, who was running second behind Eveleigh and challenging him for the lead up until a racing incident between the pair in lapped traffic on lap 19 saw Eveleigh to spin and the caution lights brought out. As a result of this contact, Gardiner was sent ROF for the restart and Eveleigh took his place back at the front of the field. Gardiner went on to finish back in fifth.

The NSW Title for V8 Dirt Modifieds, which doubled as the opening 5 Star Dirt Series round, headlined Saturday night’s action. Britten, a five-time Australian Champion, came out on top to successfully defend his NSW Title crown. Despite winning comfortably in the end, Britten, from Brisbane in Queensland, certainly didn’t have it all his own way. Local Chris Corbett started the NSW Title deciding feature race from pole position and set the early pace up until he had his winning chances halted on lap 12 due to suffering a flat tyre. Following the exit of Corbett, Scott Cannon (NSW) moved into control of the race before Britten arrived on the scene and took over the lead on lap 17. Once out in front, Britten powered away to the win and went on to defeat Cannon in second and Casino’s Mitchell Randall in third. Geoff Phillips (Qld) and local Andrew Firth rounded out the top-five finishers.

Third and final night of the Easter Showdown on Sunday night saw the RSA Street Stockers fight it out for the annual Stocksville 100 that paid $1,000 to the winner, and it was Blake Eveleigh who claimed the spoils.

Eveleigh, the 2016 Australian RSA Street Stockers Champion and Friday night’s winner of the NSW V8 Dirt Modified Title for the Sportsman category, paced the field for the entire 40-lap distance of the Stocksville 100. At the fall of the chequered flag, Eveleigh, from Maitland in NSW, defeated Brendan Hayes and Connor Reeves in second and third, while Dayna Jordan and Luke Gray ran fourth and fifth.

Grafton Speedway would like to thank Hessions Auto Parts for their support throughout the 2021-22 season. Based in Grafton, along with their nearby Coffs Harbour location, Hessions Auto Parts stock a wide range of parts and accessories at competitive prices.