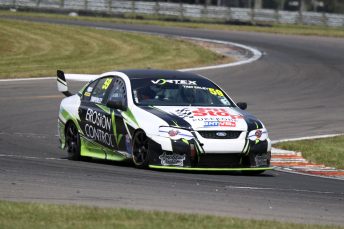 Just six races into the championship, class two rookie Brock Timperley scored his first win at Taupo’s round two of the BNT V8s in what a challenging weekend for all competitors.

Stepping up from the Mazda Pro 7 Championship, Timperley says coming into the class he didn’t think a win would come so soon, however after showing good race pace at Pukekohe including a race podium, he believed further good results were achievable.

“Coming into the class I didn’t think a win would happen this quickly, but after finding we had decent pace at round one, I believed it was possible even though my results there didn’t show it,” says Timperley.

At Pukekohe Timperley had been running the ex-Brock Cooley Ford Falcon that won the 2015/16 class two championship, before switching to the ex-Brad Lathrope class two Ford Falcon for Taupo, which his family also own.

“We were running the ex-Cooley car at Pukekohe and we are now running the ex-Lathrope car. It was bit of an experiment to a degree but we believed the Lathrope car would be the most competitive package, it obviously was the right call to make!”

In Timperley’s corner and further strengthening his championship campaign, is former NZV8 champion John McIntyre who has been acting as race engineer, something Timperley says has been hugely beneficial to him in his first year in the championship.

“It has been a huge benefit for us having him there. His knowledge and advice is second to none and we couldn’t be achieving these results without him.”

Clinching his first win in the final race of the weekend at Taupo, Timperley and his team battled a few issues over the weekend.

“Running the new car we ran into a few teething issues. Our brakes locked on in qualifying and our alternator failed causing us to DNF race one.

“We bounced back on Sunday for race two but we were spun out by another competitor, luckily we recovered and worked back up to third place.

“Race three we finally pieced everything together and worked from the back of the grid to take our first race win by a comfortable margin. Was great to finally show the pace we know we have.

“The racing has been close. I knew it wouldn’t be easy and it definitely isn’t! It’s a very competitive field and every race has been a challenge thanks to my skilled opposition.

The championship now moves to the South Island, where round three will get underway at Ruapuna, January 13-14.