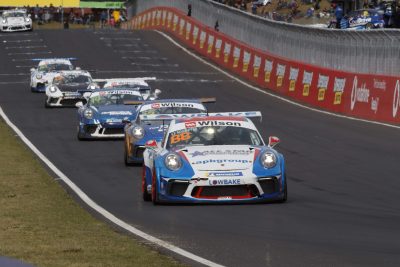 Dylan O’Keeffe has gallantly fought back from an early mishap in Round 7 of the Porsche Wilson Security Carrera Cup at the Supercheap Auto Bathurst 1000, to score a top-two race finish at the biggest event of the year.

After qualifying eighth in a wet session, O’Keeffe tangled with another competitor in Race 1, spinning to the rear of the field.

Not to be discouraged, the 20-year-old APB Group racer put his head down and set about making up the lost places, clawing his way back to eighth at the finish.

An incident at the start of Race 2 resulted in a lengthy Safety Car interruption, but O’Keeffe was still able to progress to fifth in just four green racing laps.

A lightning-quick start in Race 3 elevated O’Keeffe to third by the first corner, and he moved into second place on lap three with a move on title rival Jaxon Evans into the Chase.

O’Keeffe’s consistent weekend has seen him retain second place in the standings heading to the final round at the Gold Coast 600 in a fortnight.

“It was a weekend that had its challenges, but it came good for us in the end,” O’Keeffe said.

“In the wet qualifying session, we didn’t quite make the most of the conditions but our dry race pace was terrific.

“Even after falling to last in Race 1, we were able to make up places quite easily, and in the second and third races we made some more good moves.

“It took until the last race to come up with a result that was representative of our speed, but we can head to the Gold Coast with a lot of confidence.”