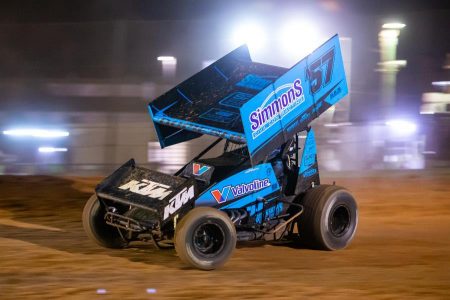 It was yet another podium performance tonight at Valvoline Raceway for the Simmons Civil Contracting/Matt Dumesny Racing team.

Dumesny started out the day as the top qualifier with a time of 12.465s before going on to capture victory in his heat race.

“We went out pretty late in qualifying, so the track was pretty brutal and it had a big cushion,” Dumesny explained. “We ended up laying down a solid lap and went quick time, so that was a good start.

On a tough and technical circuit, Dumesny drove his way to second position as the chequered flag flew – a satisfying result for the former multi-time winner.

“We were running around fifth and then started picking a few cars off,” Dumesny said. “By the end of it we were right with Sammy [Walsh], but it was a pretty technical track and hard to pass. We’ll take second though and we’re definitely happy with two podiums in a row.

“It was a successful night overall and I couldn’t have done it without my crew and sponsors, it’s a big team effort here that’s for sure. A big congratulations also goes out to Sammy on the victory.”

The Simmons Civil Contracting/Matt Dumesny Racing team will return to Valvoline Raceway for round eight of the 2018/19 USC season on 30 December.