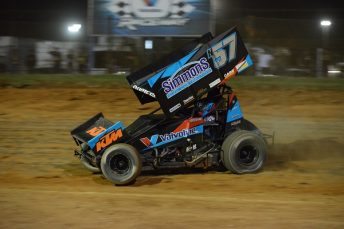 It was two wild nights of Sprintcar racing at Valvoline Raceway on December 30 and January 1. The most prestigious race on the NSW calendar – the NSW Sprintcar Championship went down to the wire on December and it was Matt Dumesny who claimed the biggest win of his relatively short career defeating Robbie Farr and Ian Madsen placed third.

It was a thrilling race that had plenty of drama and a number of leaders of the race had their race cut short. Firstly Jessie Attard was the leader of the race. Setting up a good gap on the field, it all came unstuck for the young racer on lap thirteen when he got caught up on the rough track in turn one and two and upended his car.

That elevated Ben Atkinson to the lead and he was making every post a winner until the Northern Territorian looped it in turn four and finished with a spectacular wheelstand. This allowed Matt Dumesny to inherit the lead and complete the final five laps unchallenged.

Following the top three home was Andrew Wright. And what a mission he was on! After falling back to the bottom end of the top ten, Wright fought back to claim a well-deserved fourth place. Fifth was American Buddy Kofoid who adapted well to the track and the competition.

Sixth was Troy Little who continued his consistent run, seventh was James Thompson who had a tough night early in the heats, Jordyn Brazier eighth followed by Brendan Scorgie and Warren Ferguson rounded out the top ten.

On New Year’s Night the track was brutal for time trials and caught a number of drivers out. Darren Salmon, Queenslander Mike Walsh, Shane Sheedy and Blake Skipper all took tumbles but were A-OK.

In the A-Main Jordyn Brazier came within two laps of winning his first Sprintcar A-Main at Valvoline Raceway. Jordyn led for 48 of the 50 laps before being passed by Robbie Farr.

Farr went on to take the win and claim his 45th A-Main win at the circuit. Jordyn settled for second and Daniel Sayre consolidated his top five position in the USC NSW Championship with a third place.

Troy Little crossed the line for fourth after running second for fourteen laps and Warren Ferguson came home in fifth.

Sixth was Buddy Kofoid in one of the drives of the night after starting from position twenty-three, seventh was Jessie Attard who was running second with just six laps remaining but dropped back in the final few circuits. Eighth was James Thompson, ninth was Ian Madsen and tenth was Ben Atkinson.

That concluded the four nights of international racing. The Sprintcar Association of NSW would like to thank all drivers who participated and put on a great show.

The next event on the Sprintcar Association of NSW calendar will be Friday and Saturday, January 12 and 13 for the 2018 running of the Scott Darley Challenge. A huge field is expected for the event.