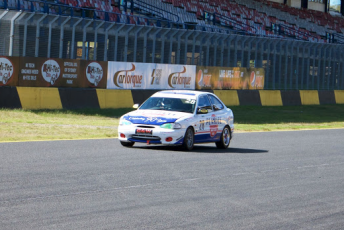 MEDIA RELEASE: Penrite/Supashock/Winmax Hyundai Excel racer Emily Duggan has extended her run of top-three results in Series X3 NSW, finishing third overall in Round 5 of the series at Sydney Motorsport Park on Saturday.

After qualifying fifth, Duggan recorded finishes of second, sixth and third in the three races to secure a place on the podium.

The highlight of the weekend was a blinder start in Race 1, in which Duggan charged from fifth to second by the first corner.

“I absolutely nailed the start in the first race, and I was able to overtake three cars before we reached Turn 1,” Duggan said.

“From there, I was close to Adam Bryant for the whole race and we were able to pull a five second gap over the rest of the field.”

In Race 2, a slightly slower start saw Duggan slotting into third position, and becoming embroiled in a dice with Nik Hough for second. While trying to set her rival up for an overtaking move, Duggan exceeded the limits of adhesion and spun at Turn 16.

“I was clearly faster than Nik but with the cars being so evenly matched, it was difficult to overtake,” Duggan said.

“I had a run on Nik coming into Turn 16 and I thought he moved over to let me through, but I wasn’t on the ideal racing line and I lost control at high speed.

“Fortunately I was able to recover quickly and I made it back up to sixth at the finish.”

The third and final race was interrupted by a red flag, followed by a chaotic Safety Car restart. Despite the confusion, Duggan continued her march forward, taking third in the final results.

Duggan was satisfied with the weekend, highlighting the strong performance of her Excel in all three races.

“The car responded well to the changes we made to suit the high-speed Sydney Motorsport Park layout and it was quick – I was able to set the second-fastest lap of the weekend,” Duggan said.

“After the enduro win at Wakefield Park, it was very encouraging to again show genuine pace at a completely different type of circuit.”

The final round of the 2016 Series X3 NSW is on the Sydney Motorsport Park Amaroo (South) Circuit, Sunday 23 October.