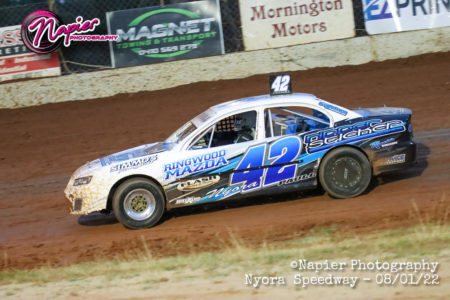 This Saturday afternoon a family friendly twilight Speedway show will be the highlight of Drouin Speedway Club’s season with big events for the Sports Sedans and Standard Saloons and support from Ladies and Junior Standard Saloons from 2pm into the early evening. The Gippsland Cup for Sports Sedans is also a round of the Victorian state Sports Sedan Power Series, whilst the ‘Sally Memorial’ for the Standard Saloons is one of the biggest paying events in the state each year and attracts a great field.

Thirty Sports Sedans have nominated to compete in the ‘Gippsland Cup’ including the current Victorian Champion Lee Beach. He will be up against some of Victoria’s best that are part of the nominations. These include Brendan and Damien Miller, Jamie Paull, Dale Smith, Scott Angus and Robert Garlick. Many talented race drivers are part of the entry list including young talent just starting out in the class such as Dillon Taylor and Bradin Claridge, Claridge won recently at Mount Beauty.

The action will be incredible with a number of drivers potential winners of a race that doubles as part of the state series for the class.

Standard Saloons will also be involved in the annual ‘Sally Memorial’ event honouring the late wife of club committee representative Paul Walkinshaw. The Walkinshaw’s have always been involved in Speedway side by side until her passing, and that included watching the kids race. Daniel Walkinshaw will compete in the race honouring his mother and the Walkinshaw family is always amongst the front runners.

The Sally Memorial this year however has the likes of current Victorian champion Shane Stewart and his brother Daniel who finished third at the Victorian title last season. Jeff Blencowe and Leigh Gooding who battle each other for the honour of being club Standard Saloon champion each season are keen to upset the visiting racers and other strong competitors such as Mark Miles, Matt Davis, Chris Miles, Jack Yeomans and Jacob Vuillermin are just some of the race drivers to keep an eye on.

Junior Standard Saloon racing includes the Cecil brothers Harry and Owen, Zac Barwise, Nathan Miles, and Beau Stuchbery who are five of the state’s current front of the field competitors who are in the fourteen-car line-up. The feature event will be keenly contested.

In Ladies Standard Saloon action fresh from a podium on Saturday night at Nyora, Maddison Miles will be up against Rebecca Glassborow a recent winner also at Nyora. Sharlene Laidlaw and Kate Stuchbery and Jemima Borkowski are just some of the competitors also in the event to follow.

Gates open from 10am. Racing from 2pm

Entry will cost $20 for an adult, aged and invalid Pensioner and Children 12 to 16yrs is $15 and Children under 12 years of age are free. A family ticket for two adults and two children aged 12 to 16 will cost $50.