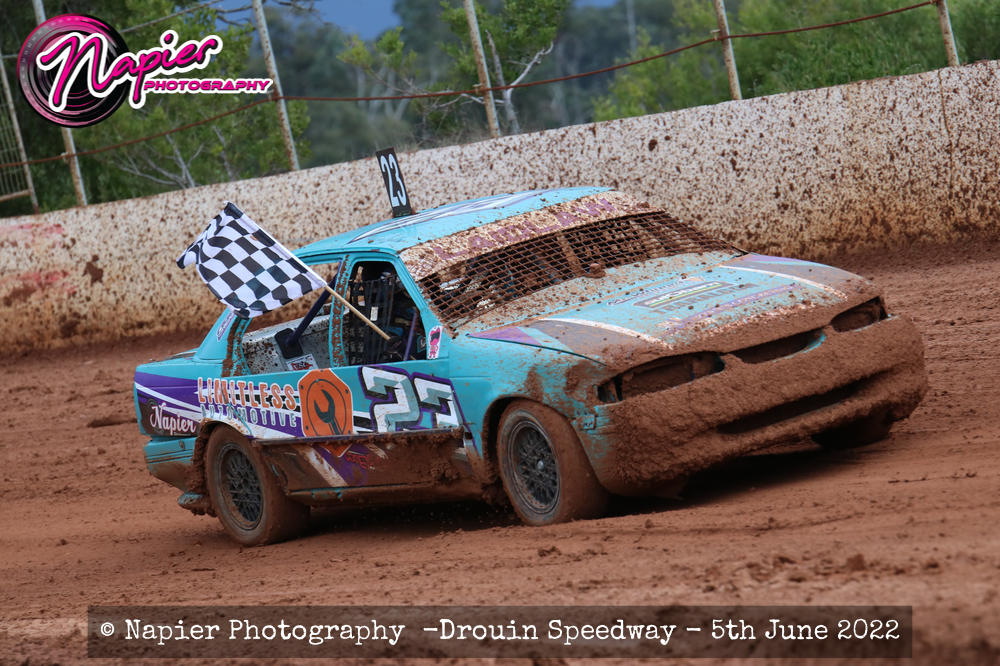 Harry Cecil closed out the Junior Standard Saloon season winning the first of four heat races before Beau Stuchbery won the second, Cecil the third and Stuchbery the fourth. The two drivers went for broke in the final with Stuchbery trying to chase him down late in the race. Cecil went on to win with Stuchbery second, Cooper Joynson from the Drouin club in his best ever third place result then Hunter Carey and Tasharni Murray in fifth.

Standard Saloon competition was tough at the front with old adversaries Leigh Gooding and Jeff Blencowe not given each other an inch, however Jack Yeoman’s took complete advantage of the situation and locked in another win. Yeoman’s won heat one and Gooding heat two. Blencowe won heat three and Yeoman’s heat four in the second round with Gooding the fastest of the Standard Saloon racers at 20.991 seconds on a lap. Gooding won the fifth heat race with Chris Miles the winner in the final qualifying.

Through the fifteen lap final, Blencowe come to his own demise as he and Gooding fought for second spot ahead of one or another. Yeoman’s went on to beat Gooding, Andrew Miles, Zac Leeson and Stephen Douglas.

Sharlene Laidlaw became a two-time feature race winner at Drouin Speedway when she won the Ladies Standard Saloons. In heat one Dette Miles took victory with Stacey Sheedy a winner in the second heat. Miles again was a winner in the third before she was chased down and past by Laidlaw as the two leaders caught up to backmarkers. Laidlaw first past the post with Dette Miles, Maddison Miles, Michelle George and Brooke Baker.

Having their first run at Drouin was the sensational Junior 1200 Sedans and they impressed as they circulated even faster than the adults. Bryce Leek won the first of three qualifiers. Arthur Hutchinson then took victory in the second before Braiden Webster won the third and set a one-lap time of 20.622, the fastest of the day. In the final, Webster could not master turn two and Arthur Hutchinson copped the wrath of the officials and was sent to the rear of the field after a race incident. Hutchinson came back to win the final from Webster, Leek and Holly Hutchinson.
The closing act the Demolition Derby seen some hard hits with Chris Aarts, Andrew Miles, Luke Milburn and Marcus Reddecliffe some amongst the big crashes, however Jeff Blencowe outlasted them all and picked up the win. Thanks to Norstar Steel Recyclers, Quick Time Automotive and Total Autos for their support for the Derby.