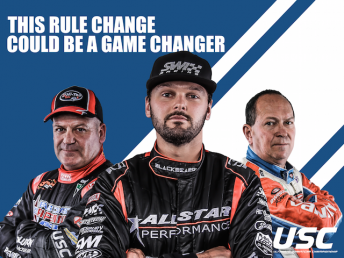 Reigning USC State Champions, Robbie Farr (QLD) Jamie Veal (VIC) and Max Dumesny (NSW) will have their work cut out to defend their titles as the new “drop-a-round” rule tightens up the championship points

MEDIA RELEASE: South Australia’s addition to the list of Ultimate Sprintcar State Championships has inspired USC management to allow racers to drop their lowest scoring round from their respective State points battle, offering racers a buffer for missing a round or simply having “one of those nights.”

The Queensland and South Australian based championships are over eight rounds, but will only count the driver’s best seven, while Victoria will run ten rounds, counting the best nine. The New South Wales Championship however will allow drivers to deduct their two lowest scoring rounds off the twenty-two race calendar.

“”Every team has some legitimate reason why they can’t race at every round,” said USC Managing Director Steve Green, “so we decided when we formed the calendar back in July that giving the drivers an opportunity to deduct their lowest scoring round made sense for everybody, and would tighten up the championships in the process.”

“We have a lot of young drivers now who have end-of-year school functions and other drivers who have overseas commitments, and really, if you missed a round in the past, then your championship hopes were dashed, but now it gives everyone a buffer at least to take the pressure off and keep them in the hunt.”

“Between four tracks, it’s impossible to avoid clashes, but then add to that the USC tracks co-operating with the schedules of other venues in their own state, I think it’s a miracle we haven’t had more calendar conflicts, so everyone wins with the opportunity to drop their lowest scoring round.”

The stipulation to “make the podium at any USC state round” to qualify for the overarching Chase Championship still remains up until March 4 across all tracks, however racers will no longer accrue Chase points prior to the Chase Championship beginning on March 11 at Murray Bridge, where every qualifier will begin the 6 round Chase with zero points.

For more details on how the USC works, check out www.ultimatesprintcar.com