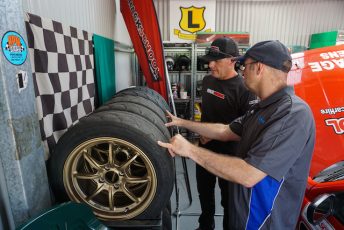 The highlights – Proxes R888R gets faster with age, saves teams money, adds safety and stands up to abuse. There is even a team that has been competitive all season on a single set of tyres. In motorsport terms, that’s unheard of.

The APRA series put the tyre through its paces, including short blasts around circuits in 10-15 lap races, long-lasting enduros and race meetings at a range of circuits around Australia.

When it comes to racing rubber, Bill Pearson at Gordon Leven Motorsport Tyres has seen it all. Providing support for the series on and off the track, Bill said the tyre got faster as it got older.

“Stripping sets of Toyo Tires Proxes R888Rs at the end of their life, they just look perfect,” said Bill. 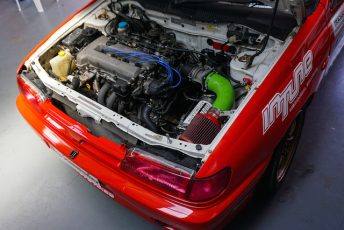 “We’re hearing quite regularly that these things get quicker and quicker until they’re practically bald, which is important in a control-tyre series as it prevents teams from buying a new tyre advantage.”

John Boston is a professional driver and major contributor to developing and running the 2016 APRA series. From stunt and precision work to racing, instructing and training, ‘Boz’ is an Australian motorsport stalwart.

“Lots of people struggle with one-make categories because it’s like a game of chess: you need to be patient as the top 10 cars can be within one second of each other, so a lot of it comes down to the driver.

“We allow tolerances to change small aspects of the vehicles within the controlled modifications but everyone’s running on the same Toyo Tires Proxes R888R, so things like suspension setup and tyre pressures are critical.

“When we considered going to the Proxes R888R the feedback from competitors was mixed around the cost of an R-spec tyre, but we’ve found that it’s actually saved them money in the long run because they’re not going through as many tyres while getting quicker lap times. 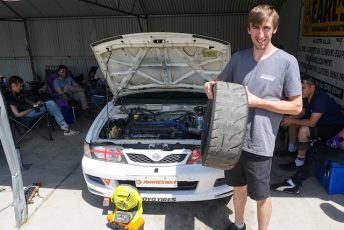 “There’s even a team in the field who’ve gone through the entire season on four tyres, which was unheard of previously. The cars weigh 1100kg and the little 195/50R15 tyre is the perfect size; they’re awesome!

“Absolutely without a doubt the competitors have saved money and safety has improved as well, so the Proxes R888R has been a big plus.”

Competitors are also singing the praises of the semi-slick, with long-time competitor Josh Heath recounting the Proxes R888R’s ability to stand up to abuse and keep on delivering grip.

“When I started there were only two to five cars a round but at the last round for 2016 we had a 26-car field, so it’s definitely growing with heaps of cars in the build for 2017. I was going pretty well in the first endurance race and got up to second before our compulsory pit stop. After going back out, the brake pedal went all the way to the floor! I had nothing but thought I’d use the handbrake and got it home in second, so I was pretty happy!”

With handbrakes locking rear tyres, any F1 fan will be familiar with the flat spots that appear after a lock-up.

“Despite the resulting flat spots, the Toyo Tires Proxes R888Rs seemed grippy the whole way through the hour-long race, whereas our old tyres would get to a point and drop off,” said Josh.

“I’ve worn right down to the canvas on a few tyres and they’re still fast. The longer you have the tyres on the faster they get, which is really weird as it’s normally the other way around!”

Race tracks aren’t the only place where Proxes R888Rs shine. Stay tuned for an upcoming feature about street driving and the transformation Proxes R888R tyres can make to any car.

For more information on the 2016 and upcoming 2017 APRA series head to http://www.apra.club/ and https://www.facebook.com/apralimited.