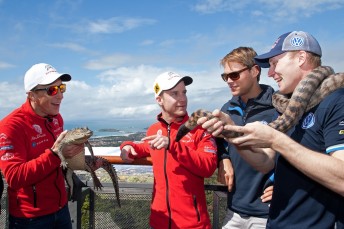 The world’s best rally drivers ‘enjoyed’ a cold-blooded welcome to the Australian round of the FIA World Rally Championship during a tour of the Coffs Coast’s scenic attractions today.

For their one day off before preparing for Coates Hire Rally Australia, which starts on Thursday, a group of drivers found themselves face-to-face with a collection of Australian native reptiles including a large python and a crocodile.

Later, they headed off the Pacific coast aboard a fishing charter boat to get a different perspective of the sub-tropical region through which they will race in the WRC 10th round.

Little did they know, their welcoming committee would be native Australian reptiles brought along by Steve McEwan of Reptile World in Coffs Harbour.

Jari-Matti Latvala, one of the most fearless drivers in the WRC, was astonished to find Leroy the (tame) black-headed python slithering over his cap.

Meeke and Ostberg took a ‘selfie’ photograph with a small crocodile, while their fellow drivers all enjoyed an experience they would be unlikely to have at home.

Accompanied by a pod of dolphins, a harbor cruise turned into an offshore excursion as the drivers tried their skills – unsuccessfully – with fishing rods.

The WRC drivers’ Big Day Out began on a more serious note with a breakfast attended by almost 140 local business and community leaders at the award-winning Bonville Golf Resort, near Coffs Harbour. The gathering was aimed at reinforcing the rally’s contribution to the regional economy.

Chris Atkinson said many of the drivers and rally crews were taking time to enjoy the scenic Coffs Coast before and after the rally, as well as visiting the New South Wales capital, Sydney.

“it’s a great boost for the Australian economy,” Atkinson said.

“The vibe around Coffs is awesome. The community is right behind it and the event keeps getting better and better. I certainly hope it can continue for a long time.”

The rally will kick off with the Coates Hire Rally Show and start from 1pm on Thursday in the centre of Coffs Harbour. WRC drivers with their cars will attend the rally show from 4pm to meet fans and sign autographs.

The first of 20 Special Stages covering 313 kilometres over three days starts at 9.18 am on Friday. The rally will come to town on Friday and Saturday nights for the spectacular Hyundai Super Special Stage incorporating the ARMOR ALL Shootout, adjacent to the Hi-Tec Oils Service Park.

Apart from the rally cars, entertainment highlights at the service park and super special stage will include an aerobatics show by the Red Bull stunt plane, an off road racing demonstration, Meet-the-Crews sessions on Friday and Saturday evenings, driver autographs at the team service bays, giant screens showing live stage coverage on Saturday and Sunday, souvenir sales and food and drink.

Tickets for Coates Hire Rally Australia and the Pedders Suspension Coffs Coast 400 partner event are available through the NRMAtix link at rallyaustralia.com.au.