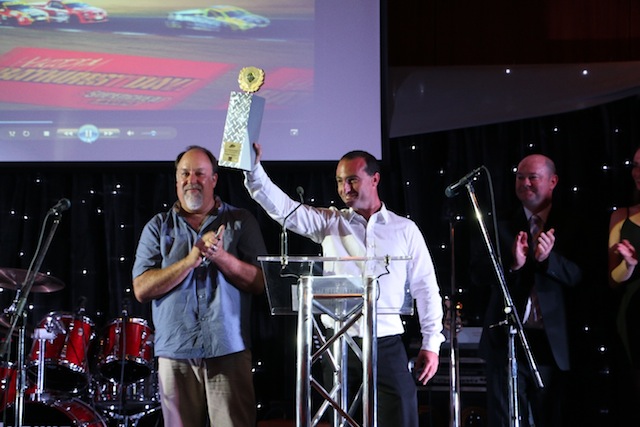 Not only was it a night for the new ARMOR ALL Drivers Champion, Kris Walton, but 11 other awards were handed out on the night, with two new awards introduced for 2014 including the King of the Track Award, which went to the driver who raised the most amount of funds for Ronald MacDonald House – South East Queensland and the 2014 Top Gun Award for excellence in engineering.

Ryan Hansford went beyond the call of duty to win the King of The Track Award, styling his hair into a Mohawk at the track over the weekend. Bebe Mawer from Ronald MacDonald House – South East Queensland was there to present the award to Hansford; he raised $6,000 for the charity and a fair few heartbeats!! 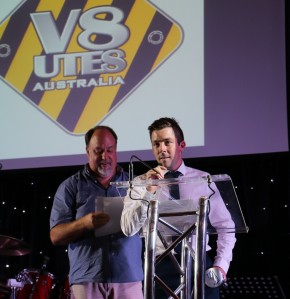 Craig DontasWith so many talented Mechanics out there the panel struggled to choose only one for the Top Gun Award for excellence in engineering, two mechanics shared the award, Bradley Packham from Sieders Racing, Packham looked after Rhys McNally’s Ute this year, McNally only just missing out on podium by a mere 8 points. Dale Stevenson was from Peters Motorsport was the other recipient, he was instrumental in Kris Walton’s setup, Australian V8 Ute Racing’s Technical Consultant Bob Riley presented the Award.

“This is an award we had when I was growing up and I thought it was really important to recognise the contribution of the mechanics,” said Riley.

The Best Presented Team award went to Just Car Racing (Elliot Barbour), Team Manager of the year to Peter’s Motorsports’ Rod Dawson and Team of the Year to Sieders Racing.

The Most Improved Driver in the Series went resoundingly to Jesse Dixon who made a massive improvement to claim third overall in the Series this year from 14th in 2013.

Jesus Racing’s Andrew Fisher took out The Masters Award for the best performing driver over 45 years.

It means so much winning this award, we’ve had an interesting year, starting off on podium and then it seems everything that could have gone wrong, went wrong but I just want to thank my amazing wife Renee, with three kids at home she has been a great support in letting me do what I love,” said Dontas.

“It’s such an honour to win this award, we are very similar to the Coopers family, my Mum and Dad and Sister come with me to every round and without their support I wouldn’t have got through the year, my thoughts are with the Cooper family and I’m honoured to take home this award,” said Woodbury.

David Sieders missed out on the championship for the 4th year in a row and this year his wife (Rochelle) made him a bridesmaid doll to take home with him.

I think my wife started making the doll about a month ago, so she didn’t really have a lot of confidence in me coming into the final round,” he said with grin.

“I’m still happy to be here on the podium, it’s been such a tough year, the competition has been so fierce so it still means a lot to be here, it’s also great to have my sponsors, the guys from “Qualify Me” here tonight, without them, I wouldn’t have been able to see the season out,” said Sieders.

Kris Walton was emotional in his acceptance speech of the ARMOR ALL Drivers Championship Trophy.

It’s been a really hard year, I can’t thank Rod (Dawson), Chris Berry and Brett (Peters) enough, the team and Rentco have been great and my parents have been there at almost every race meeting and have been a great support. I’m so glad you’re all here with me and I can’t thank you all enough for helping me to get to where I am,” said Walton.