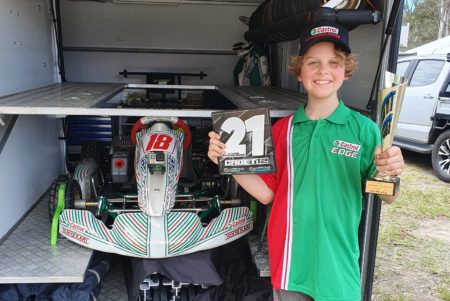 After a near three months imposed COVID break, Mathew Basso finally returned to the karting scene over the weekend looking for glory. Mathew and his father Paul made the almost seven-hour drive to the Sapphire Kart Club for their State Cup meeting. With Black Plate Titles on the line, the young Tony Kart Australia driver was looking to take his maiden state title win.

Friday was a day for young Basso to learn the track and get back up to speed after a long COVID enforced spell. Mathew and his dad Paul after a few on-track sessions discovered the Sapphire Track was quite hard on tyres. They were looking to make a strategy where they could get their set up and driver style in tune to help make the tyres last all weekend.

Saturday morning qualifying came around and this is where the first part of the Tony Kart Australia driver’s strategy came into play. Young Mathew rolled around in the first five laps of qualifying to preserve tyre life and then used his final three to four laps to set his best time. Basso came away with a solid result in position four, putting himself on the outside of the second row for the heats.

Heat one came around and Mathew was looking to get off to a positive start. With an excellent start and some smart calculated driving, Mathew was able to jump from fourth up the inside and into the lead by the opening corner. Basso was able to lead the opening few laps but had pole-sitter Hamish Campbell hot on his hammer. Lap four and Campbell was able to make a move for the lead with Mathew dropping back to second place. Campbell had a pace advantage, but the Tony Kart Australia driver was able to hold onto a strong second place to start his racing weekend.

Heat two and Mathew was able to get another clean start and made his way into position two looking strong. Basso found himself in some mid-race battles, dropped back to the edge of the top five but in a great fightback made his way back into position three.
The inside of the front row was the starting spot for the Tony Kart Australia driver and another clean getaway had him up to position two off the start. In a relatively straightforward third heat, Basso stayed in second spot all race with another strong result. Heat four and Mathew went from third to second once again and had a battle for third with Ryan Deborre. The Tony Kart Australia driver came home with another podium spot in position three and had himself looking to Sunday’s final where the Black Plate Title would be on the line.

Sunday was overcast and the heavens opened up for the final with the slick tyres off and the wet tyres on. The tyre conservation strategy now meant nothing, but Mathew was happy to get his preferred wet conditions for the final. Mathew made a fantastic start jumping into the lead in the opening corner. Basso made a huge effort to push hard in the early stages and build a gap on his rivals. With supreme wet weather driving the Tony Kart Australia driver opened a margin and was able to maintain the margin during the race. Not even lapped traffic could stop Mathew from crossing the line in excitement and joy, taking out his maiden state championship and the Black Plate!

Mathew’s father Paul couldn’t have been more excited and prouder of his young son. “Mathew drove fantastic all weekend. Hamish Campbell was clearly a faster driver in the dry conditions and if the rain didn’t come, I don’t know if we were going to pull out the win but as fate played its hand, the final was in the wet and Mathew is just so strong in these types of conditions which really showed in the final. He was so excited as he crossed the finish line. It was truly a great drive in the wet”.

Mathew noted Campbell was fastest in the dry but was over the moon with the result. “Hamish was just so fast all weekend, and I really had my work cut out for me but by the time the finals came around, the heavens decided to open up and down came the rain. I love driving in the wet weather and I knew in my heart that I could win. I drove fast and smooth in the tricky conditions in the final and was relieved to cross the line over 4 seconds in front of Hamish. Finally, a Black Plate for the trophy cabinet”.