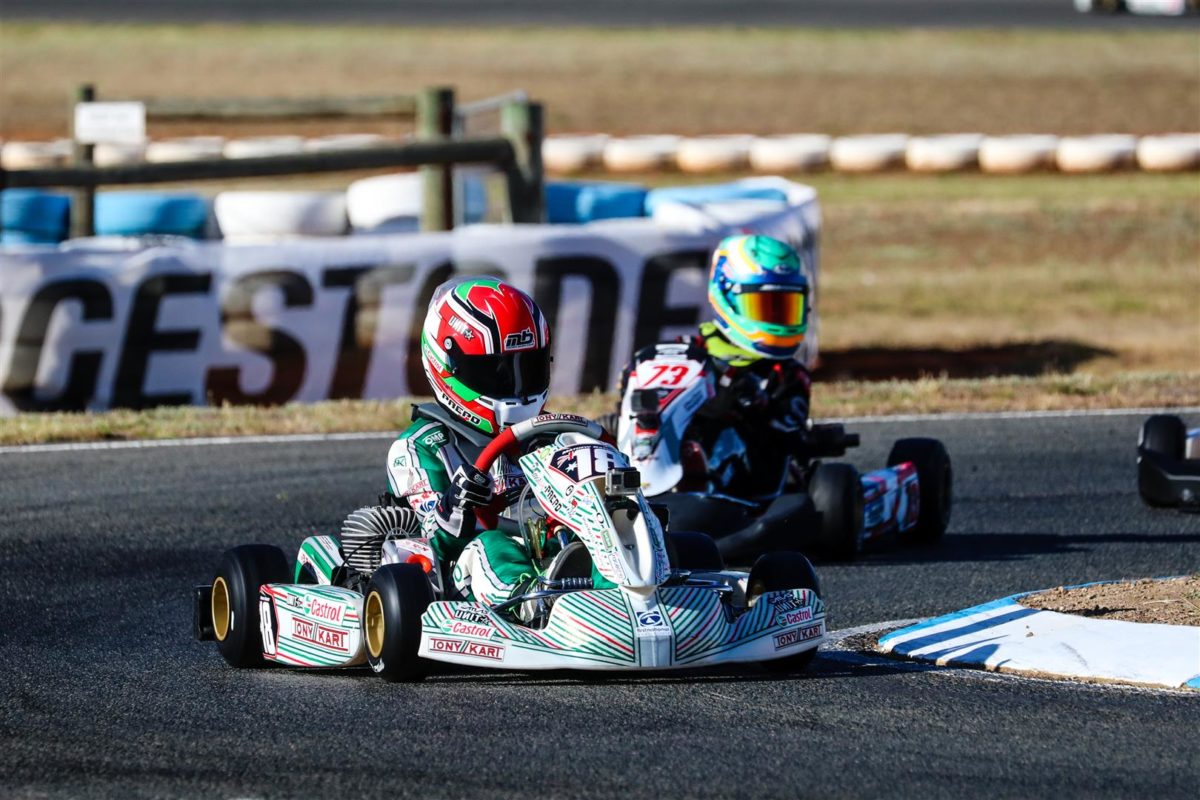 Mathew Basso took to the final round and his final meeting of the 2021 season over the weekend. Basso was competing in the ultra-competitive Cadet 12 class in the Australian Kart Championship at the Go Kart Club of South Australia.

Fresh off a recent State Cup win in New South Wales, Basso was looking to continue his strong form into his final meeting. Mathew showed good pace and improvement in his Tony Kart chassis throughout Friday practice and looked to Saturday morning qualifying to get his race weekend underway.

Basso hit the track bright and early for Saturday morning qualifying, just after eight o’clock on a cool slick track. Mathew was setting improving times throughout the session, to make his way into the top twenty drivers in the session. Once again, the Cadet 12 field was extremely competitive with only seven and half tenths between the top twenty drivers. In a tough and hard session, Mathew set the seventeenth fastest time with work now going into improving the kart for the opening heats.

Basso got a strong start in heat one jumping up three spots on the opening lap into fourteenth position. Mathew made up another spot during lap two, pushing forward through the field. Basso had some mid pack battles dropping back as low as sixteenth position in some hectic racing. Mathew then made up a spot in the back end of the race, jumping back into position fifteen by heats end.

Heat two was another good start for young Mathew, jumping into fourteenth position at the end of the opening lap. Basso dropped back to position seventeen but then put his head back down, trying to make up positions. Mathews great driving had him move back into the top fifteen through the middle stages of the race. Basso crossed the line in fourteenth position overall in heat two, once again improving his position.

Basso once again in heat three proved his starts were a strong point, jumping up inside the top ten in seventh position. Unfortunately, Mathew’s strong charge ended there, being shuffled back through the middle laps to the edge of the top twenty. Basso came across the line in position twenty with the team now working towards a better package for Sunday racing.

Sunday morning was upon Mathew and he was looking to recover from his final heat race on Saturday. Basso starting out of position fourteen and achieved another lightening start jumping up five positions in the opening lap. Mathew stayed there for the opening few laps before dropping into the mid pack battles and fighting hard for position. Mathew came home with an improved result inside the top fifteen going into the final.

Mathew settled into position thirteen at the opening lap and was looking to make positions early. Basso moved up to position eleven in the early stages before dropping back a couple of spots as the final went on. In what was a high quality and high paced final, Mathew crossed the line in position fifteen overall to round out his Australian Kart Championship!

Both Mathew and his father Paul spoke of the difficulties of the weekend. “I struggled all weekend to find pace out of my kart. I felt really good all weekend but my results just weren’t there. Starting mid pack is never fun but I was able to move forward in the early laps to run in the top 7 for the first few laps but as the race wore on, I fell back off the pace. I know we did our best but we just weren’t good enough”.

Paul echoed his young son’s thoughts while pleased with his racing ability. “I really don’t know what to say. We didn’t have pace all weekend. When you look at the lap times, we were 30th in times so we really had to rely heavily on Mathew’s race craft to get him through. We tried so many different setup changes throughout the weekend but just couldn’t find the right one. Mathew drove fantastic and did the best he could have under the circumstances”.