Drift show for the ages to hit Jamboree 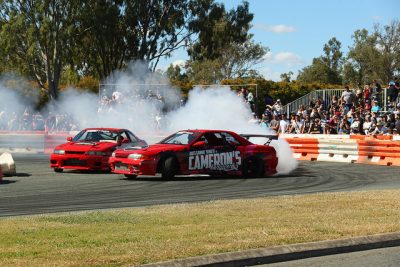 The DriftMasters exhibition will be supported by the Hot Wheels Stuntz Inc team and will be held across both days of the August 25 and 26 event at Willowbank Raceway.

“We are bringing some of the biggest names in Australian drifting out to the Brisbane Jamboree for this show,” exhibition co-ordinator and two-time champion, Rob Whyte, said.

“From national and state champions past and present to people’s champion Joel Dimmack who has a massive following online for his unique R35 GTR-powered GT240Z and the infamous Matt Mingay and Kent Dalton in the Hot Wheels Camaro and Mustang, there will be no shortage of crowd-pleasers at the Jamboree.

“We will also see the next generation putting on a show with Stephen Brugmans – winner of our recent amateur Drift Masters event – making his debut appearance aboard the Shannons Exedy Motul Nissan 350Z which he will contest at the World Time Attack event later this year in a fully-funded drive.”

Three drift exhibitions a day will be held at the Honeywell Garrett Brisbane Jamboree, presented by Link ECU and Tuners Edge.

“Fans can expect to see precision driving at a world-class level across both days of the Jamboree event at Willowbank Raceway,” Whyte said.

“With some of the most competitive drivers in the country doing their best to win over the crowd, fantastic entertainment is guaranteed.

“Alongside the Hot Wheels Stuntz Inc team, what we are putting together will be one of the most exciting drift displays seen in Australia – it isn’t too be missed!”

Next Story Steve Martin looks ahead to Morgan Park battle