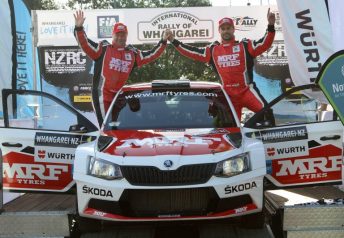 Whangarei/New Zealand, 30 April 2017 – ŠKODA MRF Teams Ole Christian Veiby/Stig Rune Skjaermœn (NOR/NOR) and Gaurav Gill/Stéphane Prévot (IND/BEL) were engaged in a fierce battle right from the start of the Rally of Whangarei. Reigning champion Gaurav Gill, this time paired with co-driver Stéphane Prévot, was fastest on the opening short “Super Stage”. During the first leg the Norwegian rookie team Ole Christian Veiby/Stig Rune Skjaermœn took the lead. On the third but last stage, Veiby had a technical issue, after a roadside repair incurred a time penalty and dropped to second place behind teammate Gill. The two-time champion finally secured victory on the opening round of the APRC 2017.

The opening round of the 2017 FIA Asia-Pacific Rally Championship (APRC) took place around the host city of Whangarei on New Zealand’s Northland. Heavy rainfall in the forests in the north of Auckland made the special stages on the first leg of the rally very slippery. “It was raining cats and dogs. The changing conditions of mud and rain made it slippery in places, when others were really grippy. Sometimes it was raining so heavily the wipers couldn’t clear all the water away – it was hard to see at all,” commented Ole Christian Veiby, who took the lead after the first leg of the rally with more than a half minute gap.

Teammate Gaurav Gill meanwhile was struggling with the setup of his ŠKODA FABIA R5. By the end of the first day, he changed the shock absorbers, modified the differential settings and was ready to fight back for the lead. The weather improved on the final day of the rally and a thrilling and close battle for the victory evolved. On Sunday morning Gill was fastest on two stages, Veiby fought back with one scratch time. With three more stages to go, Veiby was still 23 seconds ahead of Gill. In SS 14 Veiby had a brake issue and lost a lot of time in the stage. After a roadside repair, he checked in late on the time control for the next stage, got a time penalty and dropped to second place behind teammate Gill.

At the finish in Whangarei, Ole Christian Veiby was already looking forward to the next rally: “What an experience. I never thought I would be leading most of the rally, can’t wait for the rest of the APRC season!” Gaurav Gill and Stéphane Prévot celebrated their win on the podium in Whangarei after a tense and thrilling battle with their young Norwegian teammates.

ŠKODA Motorsport Boss Michal Hrabanek was delighted: “Congratulations to Gaurav and Ole Christian for their stunning performance. There is no better way to start the APRC season but with a double victory!”