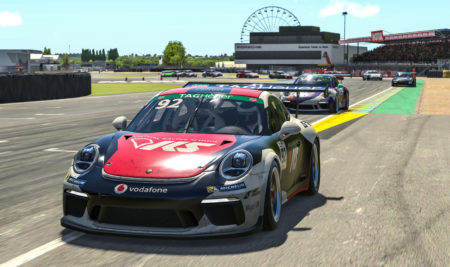 Clean sweep at Le Mans for Joshua Rogers: On the virtual Circuit des 24 Heures, the Australian set the fastest qualifying time and won both the sprint and main races. With this perfect result, the Virtual Racing School driver further extended his lead in the standings after the ninth of ten Porsche TAG Heuer Esports Supercup (PESC) rounds. Title defender Sebastian Job from Great Britain (Red Bull Racing Esports) claimed second after the three-lap sprint on iRacing’s simulation platform. In the main race, however, he had to throw in the towel early after sliding off the track. For a long time, Rogers’ teammate Mitchell DeJong looked certain to win the six-lap race, only to slide off the track shortly before the chequered flag. As a result, Norway’s Tommy Östgaard and Zac Campbell (USA) inherited positions two and three.

Sprint race: Decided in the last few metres
After scoring his fifth pole position this season, Rogers got a clean start off the line in his digital Porsche 911 GT3 Cup and immediately took the lead. After the second of three laps, the order at the top had remained the same: Rogers at the spearhead followed by his British teammate Charlie Collins, Sebastian Job, Dayne Warren (LEGO Technic Esports Team), Jamie Fluke (Great Britain, Apex Racing Team) and Mitchell DeJong. But then the cards were reshuffled: While braking for the second chicane on the long Mulsanne straight, Job swept past Collins and successfully fended him off at the entrance to the Mulsanne right-hander. On the way to the Indianapolis passage, he set his sights on Rogers and snatched the lead. The Australian launched a counterattack and, with a bold move in the Porsche Corners, reclaimed his spot at the front of the field. At the flag, a mere one-tenth-of-a-second separated him from the defending champion. Collins crossed the finish line in third followed by Warren, Fluke, DeJong and Jeremy Bouteloup (France, Coanda Simsport). The crucial eighth place went to Diogo Pinto: Thanks to the reversed grid order for the top eight, the Portuguese sim racer from the Williams Esports team took up the feature race from pole position.

Main race: Rogers keeps his cool in the heated final phase
Pinto’s stint in the limelight was short-lived: At the start of the six-lap race he was promptly relegated to third place by DeJong and Bouteloup. After the first lap, Warren had slipped through to replace him in third. Rogers got past Job to take seventh. As a result, frenzied slipstream duels unfolded with many battles for positions. The situation among the leading trio DeJong, Bouteloup and Pinto was tight. On lap three, while trying to overtake the pack in front of him, Job drove onto the green verge on the approach to Indianapolis – his daring attempt failed and both the British gamer and Bouteloupe lost ground.

Meanwhile, Rogers made up ground. After the fourth lap, the 2019 PESC champion had moved up to second place and put DeJong under pressure – at one point even managing to take the lead. The American, however, snatched it back. In the final lap, the duelling escalated. In the meantime, Tommy Östgaard had now joined the fight for victory – with the Coanda Simsport driver from Norway even spending some time in the lead. When DeJong spun in the Porsche Corners, knocking Pinto and Britain’s Charlie Collins (Virtual Racing School) out with him, the decision was made: Rogers claimed his fourth victory this season in the main race. Östgaard, who had taken up the race from the ninth grid spot, finished in second place. Third place went to the American Zac Campbell (Rahal Letterman Lanigan Esports), after starting from P16. He was followed over the line by the Italian Moreno Sirica (Mahle Racing Team), Kevin Elis Jr. from Great Britain (Rahal Letterman Lanigan Esports) and Germany’s Martin Krönke (DirectForce Pro).

With 600 points to his credit, Joshua K. Rogers heads to the final round in Monza holding a convincing lead in the drivers’ championship. Mitchell DeJong ranks second with 407 points followed closely by defending champion Sebastian Job (395).

Virtual one-make cup celebrates season finale in Monza
The final round of the Porsche TAG Heuer Esports Supercup will be contested in 14 days at the Royal Park in Monza. On 24 April, around 40 digital Porsche 911 GT3 Cup racers will pit themselves against each other for the last time this season, and the champion will be crowned at the 5.79-kilometre Grand Prix circuit. With its long straights, the Autodromo Nazionale di Monza is regarded as a full-speed temple. The sprint runs over seven laps, with the main event over 14 laps.

Comments after the main race
Joshua Rogers (Australia/Virtual Racing School): “I didn’t really want to get involved in fights so early in the race, but we were bumper to bumper and I had to keep defending my position. It’s a real shame for Mitchell DeJong. His driving was fantastic and he controlled the race very well. In the sprint race, after my overtaking manoeuvre really worked between the Mulsanne Corner and Porsche Curves, I tried it again in the feature race and it worked out again. I knew it was difficult to pass after the Porsche Curves, so I had to make my play.”

Tommy Östgaard (Norway/Coanda Simsport): “The last few corners were pretty crazy. I don’t really know what happened with Mitchell – we got really close there. So if that’s my fault, I’m really sorry. In the sprint race, I was a bit too cautious because two of my teammates were ahead and I didn’t want to disrupt too much. I lost eighth place and therefore pole position which annoyed me a bit. But in the feature race, I got my attack mode on and tried to make up as many places as possible. I was lucky enough to avoid a few crashes ahead of me. I’m happy overall with my performance this weekend.”

Zac Campbell (USA/Rahal Letterman Lanigan Esports): “I didn’t expect this result at all. For me, Le Mans is the worst track on the calendar and I struggled today. I have to apologise to Diogo Pinto, Jamie Fluke and everyone else who got caught up in that last lap ordeal. I touched the rear of Diogo’s car and caused a big crash. That shouldn’t have happened. I’ll probably give Diogo the prize money for third place because he deserved it 100 percent. Still, I’m happy with that result: from P16 to P3 – I’m thrilled.”