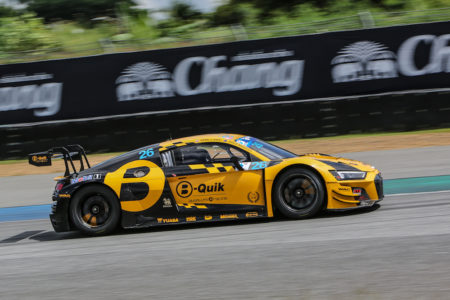 B-Quik Absolute Racing ended the opening round of Thailand Super Series 2020, held at Chang International Circuit in Buriram last weekend, with strong finishes for both cars in Race 2 and that resulted in a decent haul of points to take forward as we immediately start looking forward to the title decider of this compact and explosive season that comes up, again taking place here, in less two weeks’ time.

It was a bit of a tough weekend certainly, but in Race 2 Sandy Stuvik and Daniel Bilski in the No 1 Audi R8 LMS GT3 really dug in to fight their way to the finish line and grab second place. Sandy positioned the car well with a smooth, quick opening stint but towards the end his Australian team mate had to grittily fend off cars that had better late race pace than we were able to put together as he tenaciously clung onto P2.

Henk Kiks and Philip Massoud in the No 26 Audi R8 LMS GT3 made it two runners up spots out of two in the AM class in Race 2, a great result for this new partnership and especially so for Philip who was starting his first weekend in a GT3 car and he acquitted himself superbly.

That made up for a somewhat difficult opening race on Saturday where both cars had early setbacks and then had to battle hard to make their way back into contention. That never-give-up attitude from all the drivers paid off as Sandy and Daniel clawed their way into P5 and onto the last step of the Pro-Am podium while Henk and Philip hauled themselves into the fight and pulled off a richly deserved P2 in the AM class.

The four drivers took that tenacious spirit into Race 2 and both cars collected a decent helping of championship points, so we certainly left the North East in with spirits high.

This truncated, Covid-19 reshaped, season of just four races spread over two rounds means that at the end of that action packed weekend just gone we have now reached the halfway point of this year’s championship so the team heads back to Bangkok to immediately begin preparations for the return trip to Buriram in a fortnight’s time. A fight to the wire for the titles awaits everyone but it’s a fight we are certainly up for.