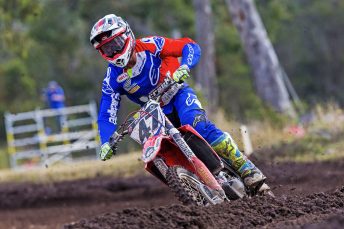 It was a stellar day for Crankt Protein Honda Racing at Port Macquarie’s eighth round of the 2017 MX Nationals in New South Wales, as Todd Waters and Luke Clout both landed on the podium in second and third respectively.

In moto one, Queensland’s Waters maintained a consistent race to pilot his CRF450R to fourth, narrowly missing the top three by half a second.

MX1 rookie Clout finished one position behind in fifth, trailing Waters as he fended off round seven victor Kirk Gibbs for much of the 30-minute plus one lap moto.

Race two saw Waters soar to second after putting in a highly-impressive outing. The number 47 was challenged in the late stages of the moto, however he maintained his composure to hang onto the runner-up position, crediting him second overall.

Clout shot out of the gates to yet another hole-shot, leading the field for the opening lap before being relegated out of the top spot. The youthful rookie hung onto the lead pack for some time, crossing the line in fourth to award him his maiden premier class podium overall.

Waters maintains fourth in the championship standings, while Clout has elevated himself to sixth position and leading MX1 class newcomer with two rounds remaining.

The next round of the MX Nationals is scheduled for 13 August, at Toowoomba in Queensland, marking the penultimate round of the series.

To stay up-to-date with the Crankt Protein Honda Racing Team, visit the team’s official website at www.teamhondaracing.com.au or follow @teamhondaracing on social media.