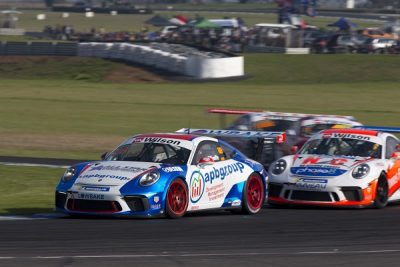 APB Group Porsche driver Dylan O’Keeffe has cemented his place as a top three driver in the Wilson Security Carrera Cup Australia with a pair of third-place finishes in Round 3 of the series at Phillip Island on the weekend.

After qualifying second by the barest of margins to Dale Wood, O’Keeffe kept the pressure on the former Virgin Australia Supercars Championship competitor throughout the duration of Race 1, before he was relegated to third by his Ashley Seward Motorsport team-mate Alex Davison on the very final lap.

“I felt I was faster overall than Dale, but he was very strong under brakes into the two slowest corners on the circuit – Honda and MG – which are the two main overtaking opportunities,” O’Keeffe said.

“At one stage, he made a mistake on the exit of Siberia and I was alongside him heading into the Hayshed, but I decided it was too risky attempting that sort of manoeuvre!

“Alex cruised up to the back of me and was able to pass me on the last lap, which was slightly frustrating but at least it was still an Ash Seward car finishing in second.”

In Race 2, O’Keeffe slotted into third behind Wood and Davison, and maintained his position for the duration of the 25 lap race.

“The conditions were cooler for the second race and our car wasn’t quite as strong in the high-speed corners, but we still had more than enough speed to keep all the other challengers at bay,” O’Keeffe said.

“Overall, it was a very positive weekend from a championship perspective – we moved back inside the top three in the series standings, and were able to make up some ground on the leader, Jaxon Evans.

“When you look at our results over the first three rounds of the season, we know we have the speed to challenge for podium finishes everywhere we go.

“The next step is to break through for that elusive race win – it can’t be too far away,” O’Keeffe concluded.

The 20-year-old’s next race meeting is also at Phillip Island – he will return to the Audi R8 GT3 for Round 2 of the Australian Endurance Championship on 2-3 June.