Dorna Sports introduces MotoGP™ live 360: OnBoard like never before

Dorna Sports introduces MotoGP™ live 360: OnBoard like never before 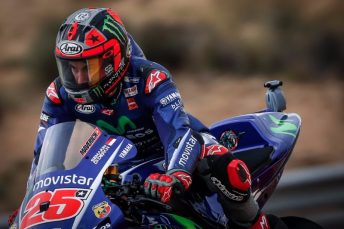 Last year, Dorna Sports introduced 360 OnBoard technology for the first time. Now, the future of motorsport viewing is ready to take another step forward as MotoGP™ reveals live, OnBoard, 360 degree coverage. Stunning in concept and exhilarating to experience, this new 360 live feed can take fans on the most spectacular pillion ride in the world, on board with the world’s fastest motorcycle racing Championship. Presented at the Gran Premio Movistar de Aragon on the machine of Spanish superstar Maverick Viñales, the technology is a pioneer in the field and takes OnBoard viewing to a new level.

Dorna has named the project and four-camera system Zoetrope, the name of a pre-film animation device originating in the nineteenth century, which comes from the Greek for life – zoe – and turning – tropos, together providing a perfect description of the immersive and breathtaking experience of virtual reality on board with MotoGP™. The idea was born from the concept of allowing fans to ride as a passenger with the world’s fastest motorcycle riders, with live 360 a key focus of Dorna’s long-running and ongoing commitment to OnBoard technology.

Since Le Mans this season, MotoGP™ live 360 has been OnBoard with Johann Zarco, Pol Espargaro and Andrea Dovizioso, with Maverick Viñales now taking fans for the ride of their life around Aragon. From this Round on, this incredible 360 footage will now be provided to broadcasters – beaming the future of motorsport worldwide.

Fans also have access to this incredible new development both via motogp.com and on the Official MotoGP™ app, opening the doors to that which was previously reserved for a select few only: 360° immersion in the experience of riding a MotoGP™ machine.

The Aragon GP is another opportunity to go on board with MotoGP™, this time with polesitter Maverick Viñales, so make sure to experience the revolution first hand – and get a glimpse of the future of motorsport.