Doran-Lista Dallara Judd to take to Daytona one more time

Doran-Lista Dallara Judd to take to Daytona one more time 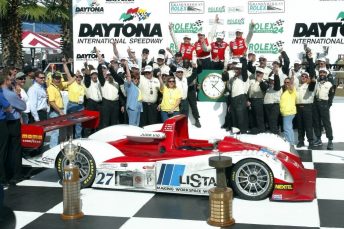 One of the most popular and successful liveries in sports car racing will be seen again on the road course at Daytona International Speedway next week, as the Doran-Lista Dallara Judd No. 27 has been entered in the Historic Sportscar Racing (HSR) Classic 24 Hour at Daytona presented by IMSA Nov. 8-12.

The beautiful red and white, 2000-model Prototype will be co-driven by Fredy Lienhard, Didier Theys and Fredy Alexander Lienhard Jr.

It’s the sister car to the one that Fredy Lienhard, Theys, Mauro Baldi and Max Papis drove to the overall victory in the 2002 Rolex 24 at Daytona at the beginning of that season.

The car they’ll use for the Classic 24 Hour made its debut in the middle of the 2002 season at Watkins Glen International in Watkins Glen, N.Y., powered by a five-liter Judd engine. The team went on to finish the season with the car, winning the overall championship. Another one of their impressive victories that year was a victory by the Lienhard father-son duo and Theys at the Six Hours of Mont-Tremblant in Mont-Tremblant, Quebec that September in the car they’ll drive at Daytona next week.

The Rolex 24-winning car is on display at Autobau, Lienhard’s racing museum and exhibition center in Romanshorn, Switzerland. The car that they’ll race in the Classic 24 Hours, which last raced in mid-2003, has been at Doran Racing’s headquarters in Lebanon, Ohio, for the last 15 years.

“Didier basically motivated me to go for this race – possibly my last one in the United States!” said Lienhard. “I have so many good memories of my time racing with Doran and the team, that I could not resist. On top, my victory in 2002 was my best ever in over 40 years of racing. Therefore, I said to myself, why not, it is a once-in-a-lifetime opportunity.

“Since September 2008 – actually on my 61st birthday — I have not been racing. We were on the podium (Didier, Jan Lammers and myself), and I could not have found a better time to retire. We were on the podium at this 1,000-kilometer LEMS race in Silverstone, England. Since then, I kept driving my race cars (Ferrari 333 SP, Dallara-Judd, Lola, Porsche RS Spyder and others) on race tracks in Europe, just for fun.

“I must honestly say that I did not want the pressure of the race environment on such a professional level any more. Didier told me that the HSR race is really for fun and for enjoyment. I look forward to this very special event – also because I will be driving with Didier and my son. Don’t forget, the three of us won the Six Hours in Mont Tremblant in 2002 – the only race ever with my son Fredy Alexander! I never thought that there would be an opportunity to repeat this – now it is becoming a reality – so great!

“We’re doing this race for fun,” confirmed Theys, who is still very active in pro racing. He’s the head coach for the Ferrari Challenge North America series, and he also works for Ferrari in other ways. He’s also the driver director of the Michelin Premium Driving Experience, which provides driving tours on both roads and tracks. He’s in Race Control at IMSA events as a driver advisor, and he does numerous track days with Lienhard at different tracks in Europe.

“I’m lucky enough to be in a race car at least once a month,” he said. “It will be great to be back at Daytona and to see some old friends, like Jim France,” Theys added. “It’s the perfect place to drive that car and have fun talking about the old days. It will be our first race with HSR. The timing was right for Fredy, Fredy Jr. and myself, and we’re all looking forward to it.”

Fredy Alexander Lienhard, now 38, is also still active in the sport, as he’s part of the group that operates Rent4Ring, a company that owns, prepares, and rents race cars to drive at the famous Nurburgring in Germany.

The format for the Classic 24 Hours calls for 24 hours of action on the 3.45-mile road course, but it’s split between six different groups of cars and each group runs for four hours, not 24. The race starts at 1 p.m. Saturday. The Doran-Lista Dallara Judd No. 27 will carry No. 271 for this event.