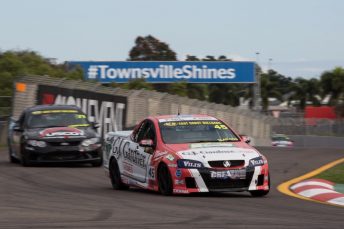 Craig Dontas has claimed 3rd Overall and had a podium finish in two Races in the V8 Utes at the Townsville 400.

Racing in his first Race in the Australian V8 Utes Championship since 2016, Dontas returned to the category with a bang, finishing 2nd & 3rd in the practice sessions.

Dontas qualified 3rd for the first Race in Townsville and was in the midst of a battle back for 2nd for the majority of the race.

Much like most of the field, Dontas finished where he started in P3.

Dontas had a great start to Sunday’s first Race and was battling for position before he spun on Lap 9 of 14.

The spin was the result of a deflating tyre and Dontas was unable to catch the front of the field but managed to finish in 6th.

Dontas was able to reach 3rd in the final Race at Townsville, despite the shortening of the session.

Dontas wrapped up the weekend 3rd overall in his return to the category.

“I felt at home returning to the Ute series, we had to get up to speed quickly. There were many differences with a new chassis and engineer combo so we used a lot of the weekend finding our balance. To be second fastest after our two practice sessions was a big confidence booster. Qualifying was a tad disappointing, the brake feel just wasn’t there. We tuned her up for Race 1 and the car was perfect, with another lap, I felt like we would have done the move on Kimbo for 2nd. Race 2 was tough, a deflating rear tyre made it a struggle! Race 3 was pretty good, 3rd was the best we could do with the shortened race. Overall it was a strong return, to grab a round podium, look after some great new partners and have fun along the way, was very cool.”