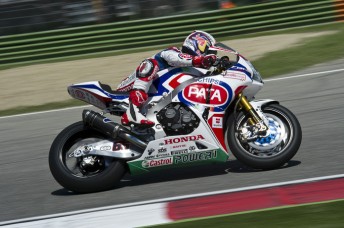 The Pata Honda team will re-assemble in the United Kingdom this weekend (23-25 May) for round five of the 2014 World Superbike Championship at the Donington Park circuit to the north-east of Birmingham.

After a home round for the team at Assen in the Netherlands last month, title partners Pata enjoyed their own home event at Imola’s fourth round in Italy last time out.

Now it’s the turn of Honda Motor Europe – based at Langley near London – to enjoy its own home round, along with the team’s British riders Jonathan Rea and Leon Haslam, who lives just 30 minutes drive to the north of the historic 4.023km Donington Park circuit.

Haslam has enjoyed two World Superbike podiums in recent years at Donington including a second place in 2009 during an earlier spell on Honda’s CBR1000RR Fireblade.

The Derbyshire rider will be more determined than ever to provide those kind results that have so far eluded him since his return to Honda in 2013.

Despite valiant efforts to the contrary in practice sessions, 30-year-old Haslam was unable to race at Donington Park last season after breaking his left leg in a practice crash at Assen just four weeks earlier.

Pata Honda rider Jonathan Rea, meanwhile, will be seeking to extend his stunning run of recent form which has seen the 27-year-old British rider take his Honda CBR1000RR Fireblade SP to podium finishes in five of the last six races, including victories in the last three with a dominant double in the last round at Imola.

That run of results has given Rea a four-point lead at the top of the championship table, but the Northern Irishman has been on the Donington podium just once in his World Superbike career. That was a visit to the top step following his victory in race two in 2012.