Two of the furthest away competitors that travelled to Redline Raceway on Saturday night won a Blue Ribbon event each as they dominated local and regular competitors at the venue with Paul Domburg from Portland winning the Chivers Memorial for Standard Saloons and Mildura’s Jake Drewett winning the ‘Flying Brick Cider Co Sports Sedan Masters’ ahead of top competition. 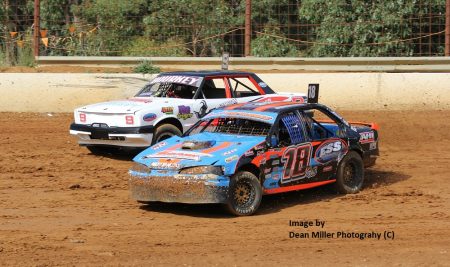 Competing for the Chivers Memorial an event which is very much in the top five Standard Saloon events in Victoria each and every season as far as a driver wish list to win is concerned, were some of the top Victorian drivers going around including multiple times Victorian champion Scott Whittle, Patrick Vuillermin a recent winner in Gippsland, Aaron Marshall a front runner in state competition, Russell Hill a regular front runner, Chris Carvill with plenty of strong results at Redline this year and Leigh Gooding a top driver for a long time in the class.

Early in the feature event Scott Whittle and Russell Hill from the front row were at each other with Hill throwing everything bar the kitchen sink at Whittle to try and take control of the race. Bursting from third row though, Domburg the current Victoria number two driver ripped past a couple of cars to put the pressure on and pass Hill then made his move on Whittle to assume the lead.

From there Domburg had the speed and Whittle needed him to make a mistake to wrest back that race lead. This didn’t occur. Carvill had a great consistent run and he had a battle with Mitch Blencowe, Leigh Gooding and Dean Pederson along the way. When twenty five laps came to an end Domburg had the win from Whittle, Carvill also from Portland, Blencowe and Pederson.

Domburg was thrilled with his win in the Chivers. “This is always a good strong field of front runners and to beat Scott here is a thrill with the Victorian title a few weeks away. It has taken us a little while to get the car on track, however it looks like we have a good one.”

Heat races earlier had Whittle winning three, Hill with two and Gooding with the other and in the pole shootout Whittle held on to pole position with a victory in the last battle over Hill.

In the Sports Sedan Masters on paper due to recent results the event looked like a Drewett versus Leigh Bourke battle and that is exactly how it panned out at the end of the night with the top two going at it in the feature events closing stages. To get to the main race we set it up with the qualifying results where nine heats were held with Drewett, Craig Phillips and Nathan Fawns won the first three qualifiers. Bourke, Drewett again and Chris Rieck won the second round qualifiers and in the final round wins went to Dale Smith, Bourke and Phillips.

In the pole shuffle Drewett despite two heat wins earlier, was only the fifth best qualifier. He had to in his first battle against Russell Smith, then the second defeat Rieck, Dale Smith, Phillips and finally win the runoff against Bourke to claim pole position for the twenty five lap feature event. The last spanner in the works was the announcer then stepped up and offered Drewett the chance to win more money if he elected to start the feature at the rear of the field and go on to win the race. Drewett accepted the challenge and started twenty cars further back than Bourke and Phillips at the front.

When the green flag dropped and lap one was done, Drewett was up into twelfth spot with Bourke leading Dale Smith. After a couple of caution flag periods and a lap later, Drewett was ninth. Bourke led Phillips, Rieck, Dale Smith and Aaron Graham with Drewett now up into sixth. Bourke had a gap between himself and the chasing pack and the last thing he needed was more caution flags as Dale Smith followed in second with Rieck and Drewett now fourth ahead of Phillips.

At lap fifteen Drewett had moved up to second and caught and passed Bourke on lap twenty two before another caution created a sprint to the finish line. The final sprint finished with Drewett winning from Bourke, Rieck, Dale Smith and Phillips rounding out the top five.

After the race Drewett shared with the presentation spectators how he felt about his win. “Starting from the rear I was banking on a few stoppages to close the gap on Bourkey. He was driving really smooth and hitting his marks as he always does and when we got close enough we had the straight line speed to bridge the gap on him. It was a fun little race and In enjoy coming to Redline and racing the Sports Sedan we have. I think I am one up now on Big D (Daniel his brother).”

In the support class racing Trent Susol took a win ahead of Cameron Impey and Nathan Lightburn in the Unlimited Sedan class whilst in Street Stock racing Jason Degoldi won ahead of Gerrard Mabbitt, Jayden Blomeley, Craig Claridge and Melissa Crutchley.