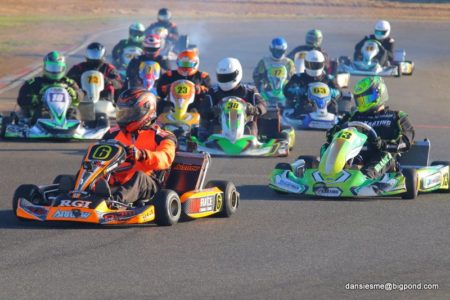 Team owner and manager Dylan McLellan took a team of twelve drivers across seven classes to the fourth round of the series looking for strong results and championship points.

DJM Race Engineering has taken multiple round victories in the series so far and was looking to add to the teams tally.

Brett Jenkin was the sole driver in the TAG 125 Restricted Heavy class for the DJM Race Engineering team.

Jenkins who was looking for his third consecutive round win started his weekend in excellent fashion, taking pole position in qualifying.

Brett crossed the line in first in all three heats and other then a start infringement in heat one was having a near perfect weekend.

Jenkins was able to get to the lead early in the final and drive away from the rest of the field taking victory and his third-round victory of the series.

Dvorak and Emmins both pushed as hard as they could in qualifying landing in position nine and eleven respectively.

Dvorak led the way in the heats never leaving the top five and having a strong third in heat one and second in the third and final heat.

Emmins moved forward across his heats which was highlighted by and excellent fourth in the final heat.

Both Energy Corse karters tried their hearts out in the final with Dvorak coming home in a credible fifth spot and Emmins right behind him in sixth spot.

Renee Dvorak was out on circuit in a near thirty kart field of KA4 Junior Light.

Dvorak qualified just outside the top twenty in position twenty two and was looking to move forward across the heats.

Renee made up positions in all three of her heats, with position nineteen in heats one and two and position twenty one in the third heat.

Dvorak was able to finish the weekend coming home in the top twenty in position twenty overall.

KA3 Senior Light had a trifecta of DJM Race Engineering drivers with Adam Campbell, Natasha Emmins and Harley Bright all taking the start.

In another field of nearly thirty drivers, Emmins lead the way in qualifying with position nineteen while Campbell and Bright were in position twenty and twenty-five.

All three drivers raced hard across the heats and moved forward with Campbell making his way up to fourteenth, Emmins up to sixteenth and Bright up to position twenty.

Emmins led the way with a strong top fifteen finish in the final.

Campbell was right behind his stable mate in sixteenth with Bright just outside the top twenty in position twenty-three.

Zane Bright was the second Bright brother on circuit for the DJM Race Engineering team in TAG 125 Light.

Bright qualified down the order in position twenty four but moved forward a total of eighteen spots across the three heats with a seventeenth position in heat one the highlight.

Zane saved his best race for last, bursting into the top fifteen in the final and coming home in position fifteen overall.

Jackson Stone and Cadel Taylor were the double act affair in the KA4 Junior Heavy class.

Stone led the way in qualifying for the DJM Race Engineering team being ninth fastest with Taylor just outside the top fifteen in sixteenth position.

Stone moved forward across all three of his heat races with a fourth spot in the final heat the highlight. Taylor raced consistently and was as high as thirteenth position in the second heat.

Stone put in a brilliant final coming home just outside the top five in sixth spot, with Taylor coming home in a strong fifteenth position.

Both drivers put in top ten performances in qualifying with Bright in position six and Wallis in position nine.

Both drivers put in excellent heats with awesome pace as Wallis had a heat race high of third spot and Bright also in the top five for two of his heat races.

Bright led the way in the final coming home just off the podium in fourth spot, while Wallis had an unfortunate DNF bringing his charge to an end.

“It was great to have another round win with Brett putting him in a really good championship spot,” McLellan said.

“Bodhi and Toby both improved their pace dramatically from the previous round and it was a fun weekend of racing with the whole team.”

DJM Race Engineering has made the long trip to the Sunshine State this weekend for round four of the SP Tools Australian Kart Championship.