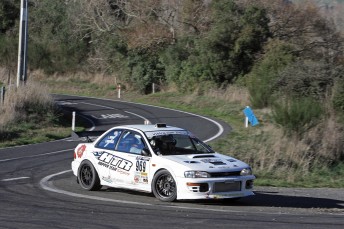 Two-time Targa Rotorua event winner Leigh Hopper and co-driver Simon Kirkpatrick head a diverse 100-strong line-up of competitors and cars for the new three-day Targa North Island tarmac motor rally this weekend.
The Auckland-Whitianga-Rotorua event starts at the Simunovich Olive Estate in the Bombay Hills at 8.35am on Friday and ends on Rotorua’s Eat Street (opposite the Village Green) on Sunday May 18 at 4.10pm. In-between, the 74 competition and 26 associated Targa Tour cars will cover 457kms of closed special stages and 840 kms of touring kilometres.
Having enjoyed the extra stage time and challenge of last year’s two-and-a-half-day Targa Rotorua event Leigh Hopper says he thinks a three-day event is the perfect build-up for the six-day ‘main event’ in the South Island later this year.
” With three days you’ve got the intensity of the shorter sprint events but the strategy in terms of having to pace yourself and keep on top of the car that is important when you are racing over five or six days,” he said this week.
Without the detailed corner-to-corner pace notes of a typical gravel event, a Targa one also places a far greater onus on the driver to be able to ‘read’ the road, a skill Hopper prides himself in and believes is one of the cornerstones of the on-going appeal of local Targa events.
Set to take the battle to the lone Hopper/Kirkpatrick Subaru WRX in the pace-setting Instra.com Allcomers 4WD class class are the Mitsubishi Evos of Franklin pairing Glenn Inkster and Spencer Winn, and North Shore duo Jason Gill and Mark Robinson.
Reigning Targa New Zealand winners Martin Dippie and Jona Grant from Dunedin are Instra.com Modern 2WD category favourites in Dippie’s Porsche 911 GT3 but with last year’s Rotorua class winners, Mark and father Chris Kirik-Burnnand from Wellington, a late scratching thanks to an engine issue with their BMW M3, Metalman Classic 2WD is now expected to be a battle between the similar BMW M3 of Chris Kirk-Burnnand’s Auckland-based brother Barry and co-driver Dave O’Carroll, and the BMW 325i of Auckland pair Rex McDonald and Daniel Prince.
Dark horse, meanwhile, in Instra.com Modern 2WD, is Cambridge earthmoving contractor Paul Collins and his co-driver Russell Bezzant. They  made their Targa debut in the main event last year in a Nissan 350Z but this weekend debut a brand new car, a 2013 Ford Mustang Laguna Seca edition.
“I saw it on TV beating BMW M3s round Laguna Seca and I just had to have one,” says Collins of the high performance model which now boasts a full roll cage, bigger Brembo brakes and a KW suspension upgrade.
The weekend event will also see the motorsport event debut of TV sports show, The Crowd Goes Wild, reporter/presenters Hayley Holt and Chris Key who will join the concurrent but non-competitive Targa Tour in their show’s promo vehicle, an Isuzu D-Max double-cab ute.
“This is one of the most exciting things I have done in a long time,” says confirmed petrolhead Holt. “I’ve always wanted to do a Targa and though I’d love to do it in a competition car the Tour is probably the best place for Chris and I to start.“
Set to again provide a different perspective on the event’s tight and twisty hill stages is top New Zealand drifter Cam Vernon who impressed competitors and spectators alike with his extreme sideways skills on the last Targa Bambina event.
This time Vernon will drift his newly acquired 6.7 litre V8-engined Nissan S15 through four stages, the Coromandel one from just outside Coromandel township to Te Rerenga on Friday, the Pumpkin Hill and Whiritoa stages south of Whitianga on Saturday morning and the Hamurana stage which skirts the northern side of Lake Rotorua on Sunday.
Finally, Targa ambassador ‘Racing’ Ray Williams will be hard to miss; he will be behind the wheel of the 001 promo car, a supercharged HSV GTS V8 vinyl-wrapped to look like Aussie ace Garth Tander’s V8 Supercar.
“It’s a beauty, too,” says Williams.”Very quick obviously, but also very nimble, and there’s room in it for four!”
The Targa North Island event has been organised with the support of sponsors Ecolight, Federal motorsport tyres, Global Security, Gull, Instra Corporation,  Kids In Cars, Metalman, NZ Classic Car magazine, Race Brakes, TeamTalk, TrackIt, VTNZ and Woolrest Biomag.