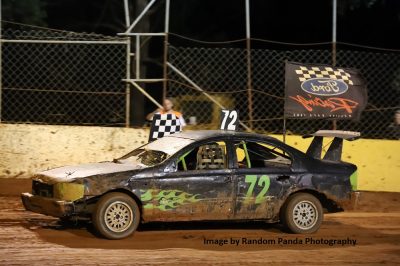 Nyora Raceway was the latest destination for the Crash and Bash Association on March the 24th with twenty plus keen competitors signing in to do battle on a terrible day as far as weather was concerned that persuaded some to stay home, those that did come to play had an absolute blast with Rob Disher again in the winner’s circle after he picked off the race long leader Nathan Taylor on the very last lap to thrill the crowd with a barnstorming finish.

The rain had earlier caused the cancellation of various Speedways around Victoria, it then settled in around most of the South Eastern suburbs and this helped made decisions easier to stay home for some competitors. However the crew at Nyora went ahead with the race meeting and it proved to be the right decision as the rain stopped and the sun appeared in order to allow the battle to begin.

Six qualifying heat races were run with former Victorian champion Nathan Taylor winning all three of his qualifiers whilst Matt Haby had a win in his new car, Mark Hebblethwaite picked up a victory as did the eventual winner Disher.

Haby had a big win over the reigning Victorian champion Jake Young who had made a switch from Ford to Holden, Andrew Corlett, Jeff House and Anthony Segond made up the top five in the second heat with locals firmly behind the Panel Van that Segond competes in.

Taylor won the third heat however Corlett was having a great start to his night with another top three result in his chunky sounding XF Falcon. Disher was third and Grant Attewell in Shannon Mairs big Valiant finished fourth ahead of Haby.

Taylor’s final qualifier win was over Hebblethwaite ahead of Young, Warren and Corlett.

The last qualifier was won by Disher with Attewell again in the top five along with Kane, Rob Bushell who had taken a while to score a result for the night with Alan George also in the top five.

Local racer Andrew Miles blew an engine in the qualifiers and finished his night early. Cody Schmal smashed into William George in heat racing and damaged his car enough to put it back on the trailer, the consolation for Cody was that he got to be passenger in Disher’s car for the final, and what a ride it was.

Taylor and Young were the front row qualifiers, Hebblethwaite was over the moon with this result, however a twenty lap race was ahead of him.

A tremendous Crash and Bash final had the crowd excited as cars were spun, crunched and even coming stuck together whilst at the front the likes of Nathan Taylor, Rob Disher, Rob Bushell, Andrew Corlett, Grant Attewell and Brad Warren weaved their way around and under cars they were passing, for Brad Warren it seemed every time he was going to put a pass on Corlett, he found Anthony Segond in the way. Early in the piece Disher hit and spun Hebblethwaite and put him back in the pack.

The leaders weaved in and out of the backmarkers, cars got stuck together, all the while the crowd was going bananna’s watching the carnage unfold. Bushell made his way forward from deep in the field and earnt him self a hard chargers award supported by Gully Tattoo’s.

Eventually at the front of the field, Disher ran down and caught up to Taylor before putting a last lap passing move to take the lead and the win from Taylor, Bushell, Corlett and Warren. The win was popular due to the fashion in which it came, although Taylor winning also would have been na popular result with locals.

Kane was another to arrive late as he too figured the race meeting would not go ahead. With a dodgy radiator that leaked all night leaving Kane to figure the best option for him was not to run the final and to save the engine for a time where he has a better radiator.

Another successful Crash and Bash performance and more fans and enquiries from potential race drivers keen to join in all the action.