Disappointing Rally of Canterbury for Gilmour

Disappointing Rally of Canterbury for Gilmour 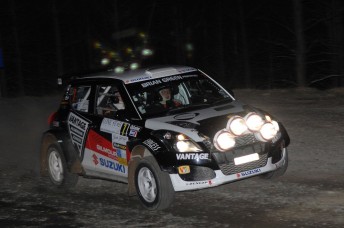 The 2014 Lone Star Rally of Canterbury was one to forget for Emma Gilmour, with engine issues ending her event prematurely.

She and Australian co-driver Ben Atkinson began this weekend’s third round of the 2014 Brian Green Property Group New Zealand Rally Championship driven by VINZ in the dark on Saturday night.

Unfortunately, the Suzuki Swift Maxi’s demister was broken, so the windscreen fogged up and the pair could not see anything on the two night stages.

Emma managed to finish fifth for the first stage, before the fogged window hampered her run on stage two.

Determined to make up for lost time on today’s six stages, Emma set off strongly on special stage three this morning but it wasn’t long before the Suzuki started overheating.

“We were unsure in the first morning stage exactly what was going on as we thought we had remedied all the overheating issues. We tried to sort it out for the following stage but unfortunately the problem wasn’t that easily fixed,” Emma says.

She credited her team for trying their best to rectify the overheating problem, which included turning the boost down at service.

“It was very disappointing event for everyone as they had put so much effort in to get the Suzuki ready for this weekend,” Emma says.

In a quick turn-around, Emma will head back to Dunedin today before flying out for Austin, Texas on Tuesday, for the X-Games next weekend. She and one other female driver will become the first females to race in a Red Bull Global Rallycross Championship round at the X-Games.

“I am really looking forward to my next round in America and feeling a bit more at home in the Red Bull Global Rallycross series,” Emma says.