MEDIA RELEASE: Canberra speedway bike rider James Dimmock will head to his ‘home track’ of Kurri Kurri Raceway this week for round six of the ten-round Heffernan Winter Speedway Series.

While the New South Wales facility may be four and a half hours travel time from Dimmock’s home, with no speedway tracks in Canberra Kurri Kurri is the closest facility to the 19 year old which hosts regular race meetings.

“It might seem strange to some that my home-track is in another state, but we are there at least a few times a month with no tracks in our home-state, thanks to their great facilities and their busy race calendar.

“Kurri Kurri is definitely my strongest track, but I wouldn’t say there is a home-track advantage as many riders consider it their home – having said that, it is always nice to compete at a track you are familiar with and I am really looking forward to getting on-track this weekend.

“We are currently half-way through the Heffernan Winter Series and it has been really busy lately with a lot of bike time. We were only in action at Nepean earlier this month and since then I have also had a practice day at Bega and a training day with Jason Crump, so I am feeling really good.

“With so much bike time and racing at my home-track, I am hoping Saturday will be a really strong showing for us.” 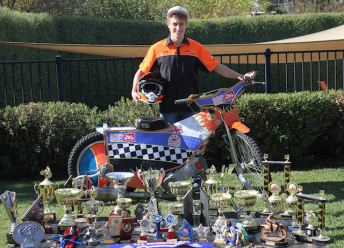 Considered one of the best speedway development series in Australia, the Heffernan Motorsport Series provides competitors the chance to ride at different oval tracks around Australia while experiencing a high standard of competition against both domestic and international riders. Races consist of four riders competing in heats before proceeding to A and B Finals, with champions crowned at the end of the ten events.

That same year – his last as a Marist College student – the Canberran was recognised through not only his appointment as a School Captain responsible for representing his school and regularly speaking to crowds of more than 2000, but also with prestigious awards for both leadership and community service.