Determined Sunday in Darwin for Heimgartner

Determined Sunday in Darwin for Heimgartner 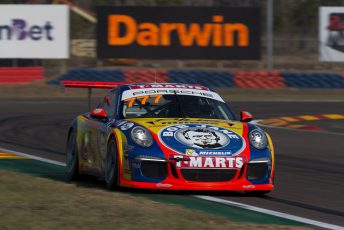 Andre Heimgartner has used Sunday at Darwin’s round four of the Carrera Cup Australia Championship to claw back vital championship points after a difficult start to the weekend.

Friday’s proceedings saw heavy side-on contact with the turn one concrete wall, necessitating an engine and gearbox replacement along with other repairs on the #777 Bob Jane T-Marts Porsche. On Saturday, Heimgartner and the Sonic Motor Racing Services team were pleased to qualify on fourth after such a large repair-job overnight, lining up on the second row for Saturday’s race one of three for the weekend.

The 22-year-old had a great start, looking set to sail around the outside of the front runners into turn one. However, running wide saw him forced to slot back into fourth before being pushed back in the opening corners melee to fifth. Later, while challenging for fourth, an inside move on turn one gone wrong brought contact and a spin, forcing him to bring his Porsche home in eighth position.

While disappointed with the results, Sunday was a whole new day for an exceptionally determined Heimgartner. Race two for the weekend saw the #777 start in eighth position, moving up to seventh by the opening corners before passing for sixth on lap two. All the way to the finish, Heimgartner would be pushing James Abela for fifth, crossing the line just 0.13 seconds behind the fifth-place finisher.

Come race three, another strong start saw Heimgartner move his entry up to third from sixth on the outside of turn one before a dropped wheel off the side of the track saw him recover for fourth. After momentarily dropping to fifth, he would get back into fourth over the coming corners, before coming up behind championship-foe David Wall.

Multiple times across the race, Heimgartner would look to the inside of Wall on turn one and looked set a number of times to secure the pass, however it wasn’t to be and he would finish the race fourth. On his way to the finish, he would set the fastest lap of the race on lap 15 with a 1m 09.4359s lap.

“Friday and Saturday were not great days for me and after the massive effort from the team on Friday night I was really disappointed to make a few mistakes in Saturday’s race while trying to get back to the front,” Heimgartner explained.

“Come Sunday though, all we could do was look forward and we just tried to keep calm, keep straight and bring it home.

“We had a good couple of starts and were able to move our way forward in both races, recovering some important championship points.

“There are another four rounds to run in this title chase yet, so we will now regroup and look ahead to the Sepang event in July – this is racing, not everything goes your way all the time, and we are confident we can get back to where we want to be.”

Heimgartner now sits second in the championship, 40 points behind Wall with four rounds still to run in the 2017 championship. The next round will be held at the Sepang International Circuit in Malaysia across July 21-23, 2017.