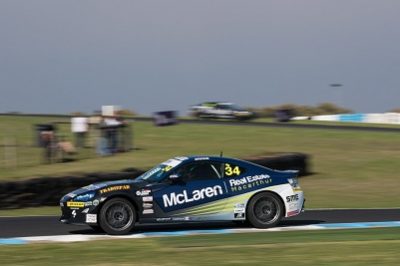 Tim Brook has been busy during the early-season break fine tuning the McLaren Real Estate Toyota 86 he campaigns in the Toyota 86 Racing Series.

The Oran Park racer sits second in the championship standings ahead of Round 2 of the competition at Townsville next month.

With more than two months between the first and second rounds of the season, it presented Brook the perfect opportunity to take stock of his brand-new car.

Built over the summer, Brook transformed what was his daily drive into a fully fledged racer, with Phillip Island its maiden outing.

Though it performed perfectly across the weekend, a determined Brook is leaving nothing to chance and has spent the weeks since pouring over machine.

“It’s been a bit of a break since Phillip Island, but that’s been good because it’s given us a chance to go over the entire car,” Brook explained.

“Going into the weekend it was a brand-new car for this year, so to have a bit of time after its first event has meant we can go over and double check everything.

“The good thing was the car was a rocket straight out of the box, so with any luck we should only be faster now!

“There were a couple of little things that we found; nothing that was wrong, just things that we’ve been able to make even better.

“That should mean we’re on the front foot for Townsville, a track I’ve always done reasonably well at.”

Brook claimed a podium around the Townsville streets last season, and heads back to Queensland full of optimism.

“We sort of marked that track as one we like and have done well at, so we’re looking to go up there and get a good result.

“The most important thing will be to get through the weekend with no damage, because there’s not long between Townsville and then the next race at The Bend.

“But Townsville is a great track, and a really good weekend, so hopefully it’ll be kind to us again this year!”

After Townsville the Toyota 86 Racing Series heads to South Australia for its first ever event at the $110million The Bend Motorsport Park complex in August.

It kicks off a busy end to the season which will see Brook racing on the support programme at some of the biggest Virgin Australia Supercars Championship of the year, including Sandown, Bathurst, and Newcastle.