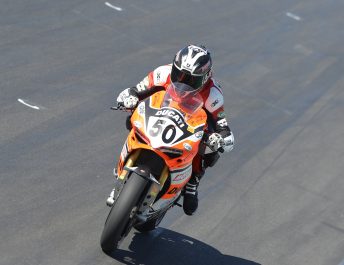 DesmoSport Ducati is a name synonymous with the 2017 Yamaha Motor Finance Australian Superbike Championship presented by Motul Pirelli (ASBK) This year sees the signing of young talent Callum Spriggs, who is an up and coming rider to DesmoSport Ducati. The ASBK caught up with Team Manager Ben Henry and Spriggs to discuss what it takes for a young rider to adapt to a Superbike.

The team’s previous rider, Mike Jones earned an opportunity in Europe to race in the FIM Superstock 1000; opening a spot in the DesmoSport Ducati garage for another young talent to sharpen their skills. Spriggs now finds himself in the ultra competitive Yamaha Motorcycle Insurance (YMI) Superbike class, as he adapts to the Ducati 1299 Panigale, under the guidance of Ducati’s Henry and Three time World Superbike Champion Troy Bayliss.

22 year old Spriggs has recorded a number of impressive achievements including fourth in the ASBK Supersport class and winning the Phillip Island Supersport Championship last year.

Spriggs described the move up from the smaller capacity Supersport class; “Racing a Superbike was a much more daunting task than what I thought it was going to be. I’m slowly getting better, but the racing is fierce and the competition is strong. Hopefully I’ll be able to manhandle a Superbike better, once I work on my fitness and strength.”

Mechanically speaking, the Ducati is a very different motorcycle compared to its competition but has a number of strong points, according to Spriggs.

“It’s got plenty of pull out of the turns, nice corner entry and excellent brakes. The ‘auto blipper’ is a really strong feature as well. Those are some of the advantages. I’ve had a bit of time on it, so it’s just up to me now.” Spriggs said.

Team Manager Henry, went into detail about the importance of fitness in modern racing.

“Cullum’s one lap pace can be strong at times, however his fitness is not quite where it needs to be and he’s working really hard on rectifying that. The penny has dropped and he’s realised how strong you have to be to ride a Superbike over a race distance.

“The guys who are the best, train as professional athletes. Its not like 15 years ago when riders never even hit the gym. I’m good friend with riders such as Troy Herfoss and Bryan Staring who are elite athletes and are constantly at the gym, out running and out on their pushbikes. Henry said.

Spriggs described his new fitness regime, as laid out by Henry; “I’m working with former Ironman at the moment. I have just finished training for a week solid with him. He’s written up a program for me and I’ve been following that for the past two weeks. Hopefully it’ll pay off with my racing. I’ve been doing a lot of cycling, running, rowing, lots of gym work, body work and of course eating a lot better.”

Spriggs and Henry are both looking forward to competing at Round Four Hidden Valley Raceway in Darwin and shared their comments.

“I rode there in 2013 and finished 3rd overall, so it was a good round, first time up there. I got along with the track really well. It’s going to be very different on a Superbike though.” Spriggs said.

“It’s an awesome atmosphere at Darwin, they get behind it 150 percent. It’ll be a good time!” Henry said.

Follow Us: Stay up to date with all the latest news and updates from the ASBK in the lead up to Round 4 at Hidden Valley Raceway by liking ASBK on Facebook, following the @asbk on Instagram and checking out the ASBK website here.

Can’t make it to the track? Then make sure you watch the ASBK, Sunday on channel SBS or Live Stream on asbk.com.au.