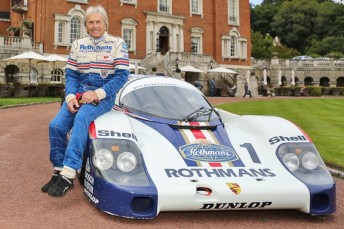 MEDIA RELEASE: One of the world’s best known and longest established one-day classic car events is gearing up for a bumper year, with half price advance ticket offers, new and established features and the chance for show visitors to win themselves a classic Mini.

The Peter James Insurance Bromley Pageant of Motoring takes place in Norman Park, Bromley, Kent, on Sunday 5th June, and yet again promises to be one of the most vibrant and best attended classic shows in the UK.

One of the stars of the show will be celebrated driver, Derek Bell MBE, who will be in attendance throughout the day featuring in Q&A sessions, signings and meet and greets. Derek is a five-time Le Mans winner, three-time Daytona 24 winner and two-time World Sports Car champion.

This year, one lucky winner could end their summer behind the wheel of a classic Mini, which is currently undergoing restoration. Competition entry tickets cost just £2.50 each and are available to buy on the day of the show, with the draw taking place at Mini in the Park (www.minishow.co.uk), Santa Pod, on Sunday 14th August.

One of the Pageant’s most popular features, One Make Parking, is available to pre-book on the show’s website, www.bromleypageant.co.uk, and is once again likely to be stacked out, with fans of many of the more popular marques coming together to form single brand displays.

Whether it’s Austins or Rovers, Vauxhalls or Fords, there’ll be a packed out area full of all your favourite cars, plus the inevitable curio thrown in. The One Make Parking is open to cars in production prior to 1996, with a separate modern classics section set aside for modern classics, introduced between 1996 and 2006.

Only cars displaying a valid ticket will gain entry to Norman Park. Once One Make Parking tickets are booked, a space will be reserved in the relevant section.

Advance entry costs £5 for a car and two passengers, a 50 per cent discount (additional passengers will pay standard admission), and will include a voucher for a free souvenir programme and commemorative plaque, to be redeemed at the Peter James Insurance stand.

Alternatively, people wishing to show off their wheels as a group can get together to exhibit cars in a dedicated ‘Club Display’, which allows a minimum of 3 cars in a suitably sized plot. There is no maximum number of cars, simply book in the number of club vehicles that are attending the show.

The show will also feature a dedicated ‘Cars for Sale’ area, where vendors will be able to show off their cars to a captive classic enthusiast audience for a fee of just £30 in advance (£35 on the day, ticket includes a single driver).

As ever, individual displays will also be welcome, to include stationary engines, overseas visitors, tractors, commercial, military vehicles, competition cars, motorcycles, pre-war, custom cars and hot rods. Again, advance tickets are £5 for a car and two passengers, or £10 on the day. Motorcyclists wishing to exhibit together can apply for a special club display.

An increasingly popular feature will be the return of the Hot Rod Review, now in its third year. Here, British hot rod builders come together to show off new and existing rods in a battle to be crowned the best on the scene, with last year’s winner, Stuart Vear, returning to defend his honours in his immaculate Chevy Pick-up.

With added attractions, a fantastic autojumble and live bands performing all day, the Peter James Insurance Bromley Pageant of Motoring promises to be a classic day out for all the family.

For more information, and to pre-book for any of the display or ‘Cars for Sale’ areas, go to www.bromleypageant.co.uk