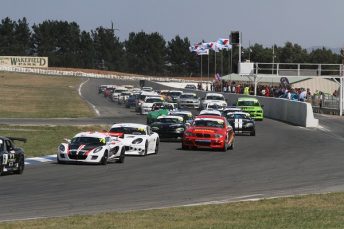 The Wakefield 300 is back in action this weekend

About the Race
Since its inception in 2008, the Wakefield 300 has grown into one of the nation’s most popular endurance races, typically attracting fields of 40 or more cars.

The event is targeted at club and state-level competitors, with the mantra of providing an affordable environment for drivers who want to experience the strategic and teamwork elements of endurance racing, but don’t have the infrastructure or resources to tackle the larger races.

Unlike other endurance races in which vehicles are divided into classes based on their mechanical specifications, the Wakefield 300 features a unique division system in which cars are allocated into divisions based on their lap-times, allowing a wide variety of machinery to compete on a level playing field.

As a result, the race always attracts a diverse array of entries, from bespoke sports cars such as the Lotus Elise and Ginetta G50, production cars including the Mitsubishi Evo and Subaru WRX, all the way down to budget one-make series machines like the Nissan Pulsar and Hyundai Excel.

While it may not necessarily have the household-name drivers of some other endurance races, the Wakefield 300 has a history of producing close and entertaining racing and plenty of thrills and spills – check out highlights from the last nine years here: https://youtu.be/ZsykiPsJeac

Notable Entries
Defending winners, the father/son combination of Craig/Adam Burgess are aiming for back-to-back victories in their Ginetta G50.
The event sponsor Deputy.com has entered a Lotus Elise for another father/son team, Steve/Jake Shelley. Jake is the most successful driver in Wakefield 300 history with three victories.
The other former winner on the grid is Shane Otten, who will be joined by Zac Raddatz in a Mazda MX5 turbo. At just 15 years of age, Raddatz is the youngest driver to start the 300.
Daniel Flanagan (Nissan 180SX) and Parry Anastakis (Peugeot 205 GTI) are both starting their 10th Wakefield 300s.
Former Dunlop V8 Supercar Series competitor Daniel Jilesen is entered in a Mazda MX5 with Lisa Montgomerie.
Several teams are using the Wakefield 300 as a shakedown for the Bathurst 6 Hour production car endurance race on the Easter long weekend, including Grant/Iain Sherrin (BMW 135i), Brett McFarland/Peter Green Jnr (Subaru WRX) and Nick Cox/Adam Gosling (BMW 130i).

Essential Details
Practice, qualifying and the Top 10 Shootout for the Deputy.com Wakefield 300 will be held on Saturday, 25 February with the race on Sunday, 26 February. Support categories are Series X3 NSW for Hyundai Excel race cars, Super TT and Legend Cars.
The full schedule can be downloaded HERE.

Where to Watch
Spectator admission for the Wakefield 300 is $20 per day for adults and $15 for concession, with children under 16 free.

The event will also be live streamed on popular motorsport news website, Speedcafe.com.

About the Sponsor
Deputy.com is a complete employee scheduling solution for any business. It enables managers to schedule shifts for employees in different locations, notify employees of their roster and tasks via email, SMS or app notification, generate stats and reports, and allocate leave.

It can automatically generate timesheets and sync with payroll software as well, saving valuable time and stress for any business.

Since the cloud-based software was officially launched in 2008, it has grown exponentially and now services more than 30,000 businesses worldwide.