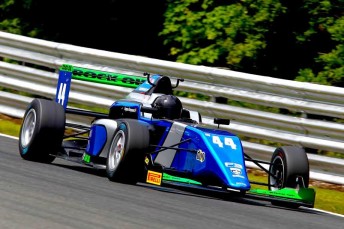 MEDIA RELEASE: Silverstone is a circuit steeped in history – Formula 1 raced there in its first ever grand prix sixty-six years ago, so it’s a big item on any racer’s bucket list.
And ticking off his next racing bucket list item is exactly what Eugene Denyssen from Somerset West, South Africa will do when he lines up for the fifth round of the British Formula 3 championship at a circuit he simply cannot wait to race on.
“I’m really excited to be racing on the Silverstone GP circuit,” Eugene admitted. “Silverstone basically my home circuit and not have we found some really good pace during testing there; but my family will also be there to support me, so I hope to put on a good show and get the results for them.
“Silverstone accommodates good racing with a wide track, a great surface and loads of run-off space, none of which we had the luxury of at the last couple of circuits, so I’m looking to impress and I believe that I can achieve good results,” former karter Denyssen concluded.
Eugene has made good progress with regular points-paying finishes in his rookie British Formula 3 season, which moves into its second half at the Cheshire circuit, with qualifying and race one Saturday 11 June and the second and third races on the Sunday.