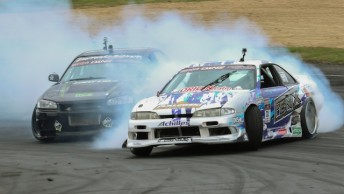 The 2015 D1NZ Grand Final, set to be held at Pukekohe Park Raceway over May 23rd & 24th, is expected to attract a huge crowd over the two-day weekend spectacle.

Regarded as the spiritual home and birth-place of competitive drifting in the country, series organisers rejoiced after winning a three and a half year battle to bring D1NZ back to one of the fastest drift sections in the world, with car speeds reaching over 200kmph into the infamous Pukekohe sweeper.

“We’ve been working so hard over the past three years to make a return to Pukekohe, and finally with all the right paper work in-place we’re thrilled to be coming home,” says series CEO Brendon White.

Nearly four years of high-performance development in the series has progressed since D1NZ last visited Pukekohe, with entry speeds exceeding 200kmh it’s anyone’s guess as to how today’s more advanced world-class drift cars will handle competition on one of the most infamous race circuits in Australasia.

Series officials aren’t taking the return lightly, ripping up huge parts of Pukekohe Park Raceway’s Turn 1 sweeper, re-sealing the corner to address the dangerous bumps and undulation that has developed over decades of motor-racing; a move that will also benefit other codes of motorsport.

“This event is set to be our biggest yet after twelve years of running events throughout New Zealand, anyone of the top five drivers in championship contention can take the prestigious D1NZ title, so the title race will go down to the wire on a course that, now, over 70 percent of our current drivers have never driven.”

“It’s been important for us to return to Pukekohe, it’s an absolute iconic venue in our sport and Turn 1 is the fastest competition drift corner in the world.

“It’s the perfect place to hold a grand final and with thousands of fans packing out the stands it’s going to be a great atmosphere, if you’re a petrol head this is one event you do not want to miss.

Defending and four-time New Zealand D1NZ champion Gaz Whiter says the event will be a huge weekend for the series.

“It’s a special place for all the ‘old dogs’ of the series. It will be so good to get back there to Pukekohe. The crowds were always huge, its going to be pretty cool to watch,” says Whiter.

“Since the last time we competed there, the cars have come a long way, they are more powerful, have bigger tyres, and will see speeds of 200km/hr on entry to the first corner.”

The 2014/15 Demon Energy D1NZ Series is currently lead by Darren Kelly on 423.5 points, followed by Curt Whitaker on 388 points and Andrew Redward in third with 385 points. Reigning Champion Whiter sits in fourth on 382.

The Pukekohe Grand Final will offer a wide range of ticket options with VVIP being the best of the lot, with cheaper VIP tickets available for $140.00 per ticket with elevated grand-stand seating plus food and light beverages served both days.

For full ticket and event information visit iTicket.co.nz or D1NZ.com