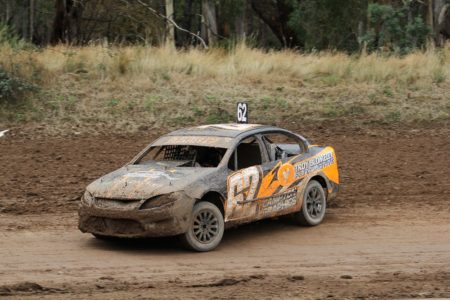 Daylesford Speedway hosted its seconded event of the season with a terrific five hours of action for fans to enjoy which featured the Speedway Sedan’s Australia Junior category, a strong field of Daylesford Street Stocks and a host of Vintage classes that put smiles on some old timer’s faces.

A healthy crowd enjoyed the family atmosphere with the Daylesford Modifieds feature race being the first final of the day and it was won by a Cortina in the hands of Jayden Humphrey who led all the way from the start to finish and defeated Bradley Trainer, Ryan Daly, Steve Warlond and Lee Harrison. Humphrey was just too good on the super banked turns of Daylesford hitting his marks consistently.

Daylesford Street Stocks had another healthy field attracting cars from West and East of Victoria to join the regulars and it would be Ballarat racer and new Daylesford member Jayden Blomeley who would take the win after a long drive to town after competing in Mildura on the Saturday night. Daniel Kettels finished in second with Chris Hay, Des Robinson and Dylan Campton rounding out the top five.

Victorian Speedway Council Standard Saloon’s put on excellent racing once again with Ballarat racer Tim Hutchinson was just a little too strong for Andrew Cormack all the way from Bairnsdale. Ashley Cormack finished in third, Trevor Crilly and Sam Rundell rounded out the top five. Andrew Cormack kept the pressure on Hutchinson however he just could not get past the back to back Daylesford winner.

Rickylee Basten went back to back in the Daylesford Ladies after winning the last race in December. This time she was too strong for Rachel Robinson on her return to racing, Jane Laidler and Pauline Fell.

Junior Quarter Midget’s also featured on the day and the results finished with Stuart Hutchinson winning the Junior Restricted Class from Cruz Taylor and Levi Coates. Eliza Taylor won the JQM 120’s from Holly Hutchinson and Ryder Taylor and in the JQM 160’s Jemma Woods took the win from Riley Taylor and Arthur Hutchinson.