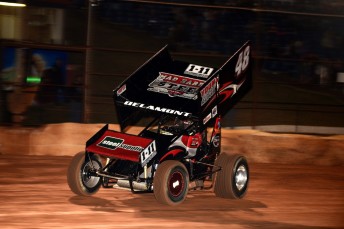 As the new season approaches, Jackson Delamont is preparing himself for a full-on assault of Sprintcar racing for season 2014/15.

The young driver will travel each week from Young in south-western NSW to tackle the tough weekly racing at Valvoline Raceway.

He will chase the Sprintcar Track Championship and like so many others, is keen for a win. Jackson also plans to compete at the President’s Cup at Avalon, the King’s Challenge at Mount Gambier and the Warrnambool Classic in January.

In addition, there are also plans to contest the Easter Trail in April.

“We would like nothing more than to get a win this season, although I want to focus on consistency,” Jackson said today.

Jackson’s season will commence his season this Saturday night and will be up against a tough field of drivers.

“Yeah, I am looking forward to it, although Dad has hurt his leg and is unsure whether he will make the trip. It’s put us in a hard spot because he is also my crew chief but we will see what happens. Hopefully his leg comes good.”

Jackson also spoke of the red-hot field that has nominated for the season opener this weekend.

“I don’t really look at who’s nominated. As far as I’m concerned, they are all the same with a helmet on. I don’t really worry about the names, I just like to go there and hopefully get the job done.”

As an added bonus this season, there will be regular Facebook updates on Jackson’s team page –
www.facebook.com/JacksonDelamont48 so fans across the country will be able to keep up-to-date with results almost as it happens.

So, if you’re trackside at Valvoline Raceway this Saturday night, make sure you head to the pits to see Jackson, grab an autograph and have a chat.

Jackson will also be selling off last season’s merchandise at special prices in preparation for new merchandise that will be arriving soon, so make sure you check that out too!

Jackson would like to thank his sponsors for their support this season: Mad Harry’s Steel, Steel Supplies, KRE Racing Engines.