Easter Bunny brought Street Stock driver Jason Degoldi a feature win on the weekend, with the driver of the Number 27 claiming the chequered flag in the feature event at Swan Hill’s Sonic Speedway on Sunday night. 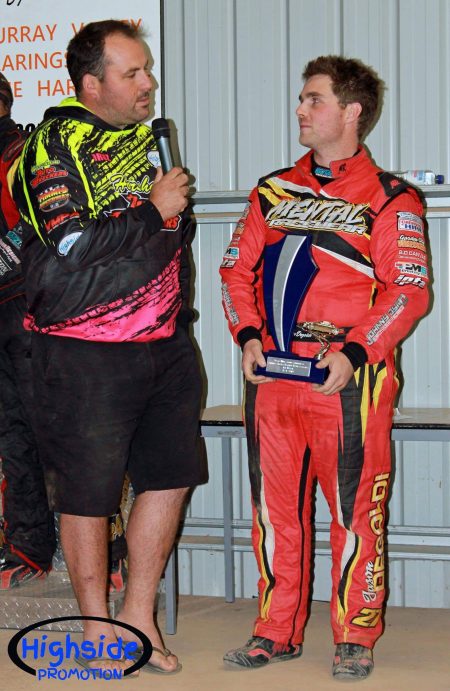 Degoldi headed to Mildura to compete on Friday night before travelling to Swan Hill to race the club’s Easter Extravaganza.

On Friday night it was Degoldi along with local racing talents Corey Sandow and Jason Faux who set the pace all night.

Degoldi ran third to Sandow and Faux in his first heat, while in his second heat Degoldi claimed first place with Faux finishing second and Sandow third.

Degoldi started from the front row in the final at B and S Earthworks Timmis Speedway and finished in second place, behind Sandow who claimed the final win and in-front of Faux who finished third.

“Running with the guys at Mildura is definitely good,” Degoldi said.

“They are always tough competition.

“The track had plenty of water in it which is what I need more laps on so that’s good for me.”

Degoldi and his team did a diff change on Saturday to suit the bigger track at Swan Hill and a bolt check was the only maintenance required.

Sunday night Degoldi lined up against some of the biggest names in Street Stock racing with the likes of Brad McClure, Brooke Ferguson, Jason Duell, Mick Dann and Shane Roycroft supporting the event.

“It was defiantly a loaded nomination list,” Degoldi said.

“With the 26 cars entered it could have been anyone’s race.

“I was just hoping we didn’t get rained out.”

Degoldi had a drama free night, with the only hassle a puncture in a rear tyre in the first heat.

He ran second to Duell in that first heat, claimed the chequered flag over Lewis Clarke and AJ Lawrence in his second and won his third heat in-front of Jayden Blomeley and Jaidyn Dredge.

For the Pole Shuffle he qualified highest point scorer and came up against Mick Clarke.

“Pole Shuffles definitely aren’t my favourite thing as I usually end up in the fence,” Degoldi said.

“In saying that I did have a good start with Clarke but just couldn’t make the car stick.”

Losing to Clarke in the Shuffle, Degoldi started from Position Two in the feature but was quick to gain control of the race before Dann made a pass on the outside and Degoldi settled into second.

“Dann was just faster there so I thought I’ll just chase that line and see how it felt,” Degoldi said.

“It was definitely a good part of track to run on and when he ran high (and Degoldi was able to pass him) I just had to tell myself just keep doing exactly what I’d been doing while I had been chasing him and see if I could hold out until the end.

“Winning the feature at Swan Hill is awesome – I’m pretty stoked with that.”

Degoldi will be back on track this weekend for the Club Championship at Redline Raceway, Ballarat before wrapping up his racing season at Top Gun in Mildura in May.

Degoldi would like to thank the sponsors of the Number 27: