Deflandre wins a dramatic race and takes the points lead

Deflandre wins a dramatic race and takes the points lead 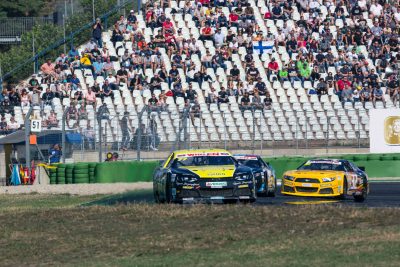 Deflandre, who was leading a tight and spectacular battle for second place, took advantage of the situation to grab the checkered flag and the red Whelen sticker going to the championship leader.

“Ulysse was too wide on the outside in the turn and got a puncture,” said Deflandre who won his second race of the season for Memphis Racing. “That was my big opportunity to win the race and I did it. It’s a big win for us because Ulysse has been a bit faster than me. I pushed so hard to close the gap. I’m the championship leader now but we are so close together that it will be a difficult Final at Zolder.”

“It was a slow puncture and I was trying to stay out front, doing my very best,” said Delsaux. “But in the end I was not able to keep the car on track and I spun out. We were fast, we will have to fight back at Zolder.”

“Ulysse had a problem in the last lap and we managed to move up a position,” said Guiod. “We were quite good and close to Guillaume. We are very happy with the result and we want to get back on the podium and win a race in the Finals at Zolder next month.”

“Yesterday I was very disappointed as we could not reach a spot on the podium,” said Venturi, who positioned himself to win the 2018 Rookie Cup and a race in the US with it. “I took no risks and was very careful. I’m very happy to finish third in such a close race. It’s very good for the Rookie Cup but I absolutely want to win the championship! I want to thank my team, family and partners for the great support.”

The ELITE 2 will be back for the Euro NASCAR Finals on October 20-21 at the legendary Circuit Zolder in Belgium. All races will be streamed live on Fanschoice.tv, Motorsport.tv, the NWES Facebook page, the Euro NASCAR YouTube channel and a vast network of websites and social media profiles around the world.