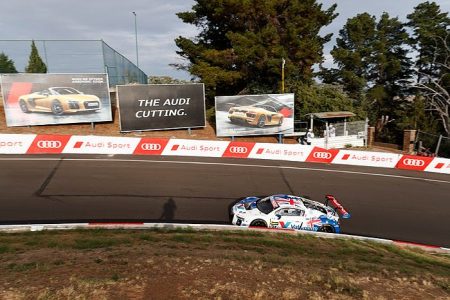 Audi’s attempted defence of their Liqui-Moly Bathurst 12 Hour victory will come with a significant presence both on and off the track in 2019.

As well as multiple Audi R8 LMS entries attempting to win the brand back-to-back 12-Hour victories for the second time, Audi has also committed to supporting the entire event and ensuring a significant presence off track as well.

Audi vehicles will be on display in the popular Harris Park Manufacturers Walk area, allowing fans to get up close with road and race products currently offered by the brand.

As well as a large corporate presence in pit lane, several lucky guests will enjoy laps of the world famous 6.213km circuit aboard examples of the powerful Audi Sport RS range.

Audi signage will also be extremely visible around the circuit as the brand takes ownership of both the Mountain Straight Bridge and the Audi Sport Cutting in 2019.

Victory by Audi Sport Team WRT in the dramatic 2018 race saw the brand win their third 12-Hour, the most of any marque since the race moved to GT3 regulations in 2011.

A fourth win would make them the most successful brand in 12-hour history, while the brand also has started on pole three times since 2011.

“The Bathurst 12 Hour is one of the most gruelling endurance events in this part of the world, and so we were proud that Audi took its third victory last year,” said Paul Sansom, Managing Director of Audi Australia.

“In 2019, nothing less than another win is our target, and we look forward to seeing our five entrants battle it out on the track against some very formidable competition.”

“Since 2011 Audi has made the Liqui-Moly Bathurst 12 Hour their own, and they have supported it each year,” he said.

“Their ongoing support has been rewarded in more success than any other brand in the ‘GT era’ and we know their on-track product is going to be just as strong in 2019.

“Off track we are looking forward to seeing their always impressive presence and the Audi Sport signage at the famous Cutting – where so much action has occurred over the years.”

The Liqui-Moly Bathurst 12 Hour is supported by the NSW Government via its tourism and major events agency, Destination NSW