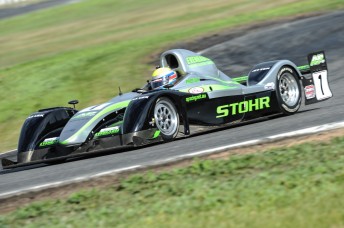 Penrith’s Adam Proctor will be looking to push ahead with his Australian Sports Racer Series title defence this weekend when the Series heads to his home-track of Sydney Motorsport Park across 11-13 July for its third round of 2014.

Proctor is currently second in the championship standings behind Series newcomer Roger I’Anson, joining the two-time event winner on the podium at each of the two 2014 outings so far with two second-place results.

Small issues have impeded the defending champions progress so far this season, but with the next two events to be held at venues which Proctor feels suit his Stohr racer best, the 31 year old owner of AP Racing and Stohr Cars Australia is hoping his luck is about to change.

“We have definitely made the best out of some tough situations across the first two rounds this year,” said Proctor, who is supported on-track by Evenrange Concrete Treatment Solutions, AP Racing and Daughtless Stohr.

“We had some minor issues at the opening event at Mallala but still managed to finish all the races and bank some good points, while the second round at Winton saw a mistake I made in the first race put us on the back foot for the rest of the weekend.

“Despite that I was pretty happy with the pace of the car overall especially given that we didn’t have any dry running until qualifying, and I feel that we are now on-top of the new set-up with the Kumho control tyre that should make a big difference for the remainder of the season.”

According to Proctor, the #1 AP Racing Stohr is well equipped for the flowing layout of Sydney Motorsport Park.

“Heading to Sydney I am feeling quietly confident we can secure some good results – the Stohr seems to prefer the longer flowing ‘aero’ tracks like Sydney Motorsport Park and Phillip Island as do our Suzuki engines, and we have done a fair bit of testing and racing in Sydney with some strong results in the past,” said Proctor, who thanks Robert Hop, Rick Copeland and the Proctor family (headed up by dad Bob) for their assistance of his racing.

“It is certainly a track I enjoy, although I wouldn’t go as far as to say I have an advantage at the circuit. We have some tough competition to race against including James Winslow who has just returned from competing at the LeMans 24 Hour and obviously Roger (I’Anson), who is on a roll.

“It is going to be tough, but I am confident we will be fighting for the win and hopefully we can challenge for the lead of the championship – if we had had a better race one at Winton and didn’t have to fight our way back through the pack the standings might have been a bit different, and the fact that we were right with Roger in the final race while running identical lap times shows that the rest of the year is definitely going to be interesting!”

Proctor will be joined on track for round three of the Australian Sports Racing Series at Sydney Motorsport Park from Friday 11 to Sunday 13 of July. Full event information including entry lists and event schedules can be found at http://www.sportsracer.com.au/schedule/sydney2014 will be a year of change for the Australian Sports Racing Series, as it steps up to a truly National level for the first time. With spiritual links to the hugely popular sports car racing scene of the 70s and 80s, these LeMans prototype style sports cars offer scintillating performance, amazing dynamics and spectacularly close racing.

For more information on the Australian Sports Racer Series, go to www.sportsracer.com.au.