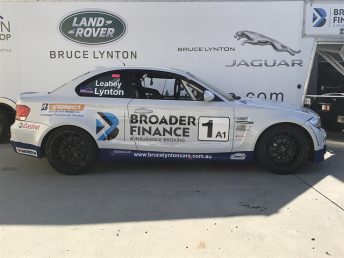 Defending Australian Production Car Champion Beric Lynton and co-driver Tim Leahey will make their return to the series today at Queensland Raceway after work commitments forced them to miss rounds two and three.

Round four of the APC will be held at the Ipswich venue across August 4-6, with Lynton and Leahey to contest the #1 Bruce Lynton Prestige Automotive BMW1M in the A1 Class.

“We will turn up this weekend to race hard. We are not in championship contention, so we don’t need to worry about banking points.

“A strong field has entered with the addition of some local M3s that’ll perform well on the long straights, and we are looking forward to the challenge.

“We won the round there last year, so we are keen to come back and defend the QR round, while for the first time, running the number one on the car since taking out the title year.

“While we have won the championship before, in that case I stuck with my normal number – this time, we have changed to the number one to highlight the successful history of the car as it is up for sale.

“When it does sell, we will continue in the APC with a new car, so there are plenty of exciting times ahead- starting with this weekend’s racing!”

Lynton and Leahey will be part of a 25-plus field of cars taking part in round four of the 2017 APC at Queensland Raceway across August 4-6, with the event to feature two x 300km races, including the infamous ‘Fight in the Night’ under lights race on Saturday evening. Spectator access on Friday is free, and only $20 for Saturday or #30 for Sunday admission – a weekend pass is also available for $40.00. All of Sunday’s action will be streamed online live and free via thenationals.com.au