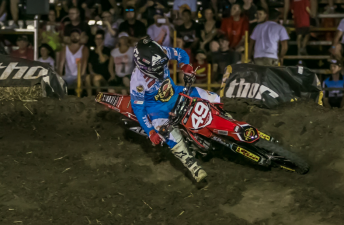 MEDIA RELEASE: Penrith Honda Racing’s Jimmy Decotis has extended his lead in the Australian SX2 Championship, following a second place finish at the fourth round of the 2015 Australian Supercross Championship in Jimboomba on Saturday evening.

Decotis qualified fastest and recorded the fastest laps in the 15-lap SX2 final on board his Honda Genuine Parts backed CRF250R, but was unable to make a safe pass on eventual race winner Lewis Woods.

With the championship in mind, Decotis maintained his composure and settled for a second place finish, ensuring he carry’s a 26 point buffer into   this weekend’s penultimate round of the series in Sydney.

“I made an average start and several mistakes before I caught Lewis (Woods) but I couldn’t make a safe pass and I needed to be mindful of the championship,” Decotis explained.

“The team let me know that Luke Clout was out but I didn’t know that Jackson Richardson had crashed as well. Once I settled in I realised that I was in front of my closest championship rivals and I needed to race smart. The track was tricky as it had dried out earlier with temperatures nearing forty degrees.

“We now take a 26 point lead into Sydney but by no means is the pressure off,” Decotis added.

The Penrite Honda teams SX1 rider Gavin Faith gated well and looked poised for a top five finish before a coming together with Kade Mosig sidelined him momentarily.

“I am not sure exactly what happened,” said Faith. “I came together with another rider and broke some spokes in my front wheel.

“The team quickly fixed it and I was able to get back out there but it cost me a quite a few spots.”

Faith finished a creditable eighth following the altercation and has moved to eighth in the SX1 championship standings.

Team Principal Yarrive Konsky acknowledged the hard work his team has been putting in between rounds.

“The team tested between rounds and it has paid off,” Konsky said.  “We worked closely with Pirelli and improved front end grip in drying conditions.

“Supercross tracks dry quickly during the day and the work we did with Pirelli really made the difference.  My team has been relentless in pursuit of the championship and I can’t thank them enough.”

The Penrite Honda team will have a short turnaround in preparing for the penultimate round of the 2015 Australian Supercross Championship this coming weekend at Sydney’s Allphones Arena.