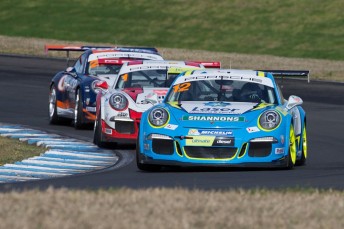 Porsche Carrera Cup Australia will feature its largest field in 10 years when lining up for Round 6 of the 2014 season at Sandown Raceway this weekend.

The return and introduction of drivers over the past two rounds has increased the championship to 24 entries for the Melbourne event – Carrera Cup’s 80th round – which is the largest field since the one-make championship featured 26 cars at the 2004 Sandown round a decade ago.

Heading the Porsche field, Carrera Cup’s leading three drivers are preparing for a busy end to the season: Steven Richards, Warren Luff and Craig Baird will continue their respective Carrera Cup title campaigns while also co-driving in the V8 Supercars Sandown 500 endurance race – as well as the subsequent Bathurst 1000 and Gold Coast 600.

Luff is looking forward to the busy Sandown weekend and believes the double driving duty is beneficial to him and his title rivals. 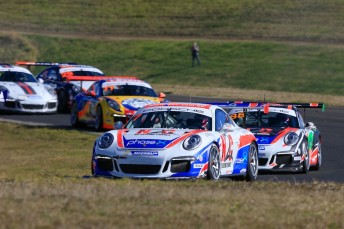 “Sandown going to be another circuit that suits the GT3 Cup car; the high-speed, fast and flowing nature at the end of the back straight is going to be a lot of fun. As we’ve seen at every round this year the racing has been very close and competitive so I don’t expect anything less this weekend,” said Luff.

“It’s definitely going to be a busy weekend. Obviously this year we have double duty at all three of the remaining events.

“I think it proved to be a benefit doing double duty for all of us last year because you’re in a car constantly and are in the right mindset.”

When swapping to the V8-powered series, Luff, Richards and Baird will be part of a 50-strong driver line-up, of which 36 per cent (18 drivers) have Carrera Cup experience.

With Carrera Cup experience in mind, only three of the 24 Carrera Cup drivers have raced previously in the one-make championship at Sandown – 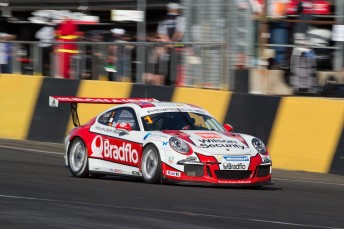 Baird, Marc Cini and Ash Samadi – while Carrera Cup itself ends a six-year sabbatical after last visiting the Melbourne circuit in 2008.

The long time between Sandown rounds suggests this Porsche field will set a record pace, with racer Brenton Ramsay looking forward to the unique Melbourne circuit.

“To get this car out on Sandown down the long straights and then to come over that rise down to Dandenong Road, it’s going to be fantastic. I’m really looking forward to it.”

Richards brings a 12-point lead in the Outright and Professional Class standings over Luff while fellow Melbourne-based racer Stephen Grove leads the Elite Class standings by 47 points from James Bergmuller.

Porsche Carrera Cup Australia will hold three 17 lap races over the three day event, with its opening two races to be broadcast on 7mate.